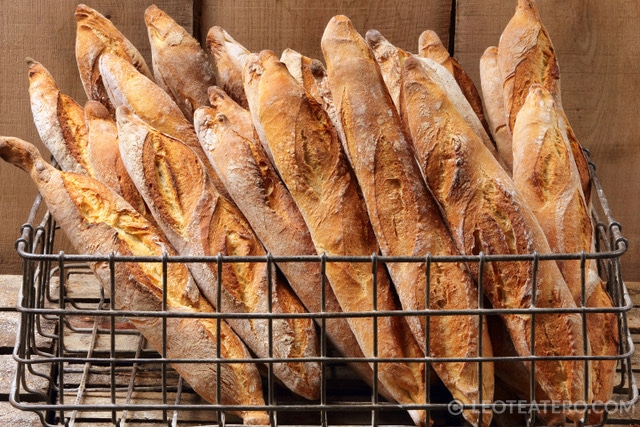 The importance of baguettes and boulangeries in France is paramount.  It is the lifeline of the country and has been for about 300 years or so.   Today well over 30 million baguettes are sold every day in France.  La tradition, as it is called in many boulangeries, is made with a light yeast dough formed into long sticks of bread with a crisp crust.   Eaten with every meal in France, and a staple in most restaurants, smothered with jam and butter or used to dip in sauces, it is a delightful light and crunchy bread.

Boulangeries aka Bakeries are a huge aspect of life in French.  From delivering people their daily bread and croissants they also provide the desserts for many family tables.  One of the most charming stereotypes is to see is a person walking down the street with one or two baguettes under their arm, and they are always eating the end of the baguette as they walk.  It’s a French tradition and I love it!  If you come early in the morning, your baguette will still be warm from the oven.  It is a cliché that French people eat croissant every morning; chances are however they will eat baguette with butter and jam every morning.  You can order it blanche (more white), or bien cuit (more well done), depending on your taste or goût.  It comes in grainy wheats and cereals which also make the most incredible bread crumbs or croutons, fried in butter, herbs and garlic.

Bread even had a critical role in the French revolution.   Back in the 18th century, the royalty and wealthy ate wheat bread with a vast range of meats and vegetables prepared by chefs.  On the other hand, the peasants ate rye bread the sometimes-contained hair, sawdust or dirt, as ingredients were scarce.   Which gave birth to the famous quip of Marie Antoinette when told that the peasants had no bread to eat, retorted with “Qu’ils mangent de la brioche”, translating to “Let them eat cake”.    You see, bread was their only real consistent source of food.  The majority of a peasant’s diet came from bread, and an adult male could eat as much as two or three pounds of it a day.  There was no such thing as brioche or cake for poor people.  In fact, the riots that resulted in the fall of the Bastille on 14th July 1789 and helped start the French Revolution began as a search for arms and grains.  Parisian peasants suspected that the rich and nobles had been grain hoarding in anticipation of higher prices, and took to the streets in protest.

As for the shape and style of the baguette, there are several versions of how it became so popular in France.  My favourite is that when the workers were building the underground metro system in Paris, the workers would get into fights and sometimes they would turn deadly as each it was common for every worker to carry a knife to cut the large loaves of bread at lunch.  So, the people in charge of the metro asked bakers to create longer and thinner loaves of bread, so no knife would be needed.   Another favourite version is that a law was created by the government forbidding bakers to wake up before 4am, so they needed to come up with a bread that did not need so much time to rise like traditional bread, creating the baguette. The third which was from the 19th century, said that they were created because Napoleon wanted bread that was easily stackable and transported, unlike round loaves which were common at the time.

The word baguette comes from the Latin baculum which became baccheto (Italian) meaning staff or stick.  Like many products in France, there are rigorous laws around what qualifies or doesn’t qualify as a baguette.  It can only include the four ingredients: flour, salt, water and yeast.   It is traditionally around 24 to 30 inches in length and needs to have been baked on the premises where it’s sold.  But for all this precision, making a baguette is a surprisingly simple affair; bakers start by whisking together water and yeast, before adding in the flour and letting a dough form.  Salt is then added and the dough is kneaded until elastic and smooth, then the surface is cut open and then it’s left to rise in a basket lined with couches or cloths.  Its then baked until golden brown and dusted with flour.  And the key to knowing if it’s a good batch? The gentle snap and crackle it should make as you press the crust.

Le Grand Prix de la Baguette began in France at the end of the war, to decide who made the best baguettes, and it is still exist today.  Nearly 200 bakers compete every year in front of a panel of judges, following strict guidelines.  They are evaluated based on baking, appearance, smell, taste, and crumb.  The winner receives 4000€ and supplies France’s president their daily bread for the duration of that year, until a new winner is chosen.  Today, they are a symbol of France known world-wide.

The Best Boulangeries in Montpellier

France has over 32,000 bakeries or boulangeries as they are called in France.  I put together a short list of the 10 great bakeries in Montpellier.

And here is my final tip, baguettes also freeze beautiful, you can re-bake them from mildly-stale or frozen by coating them in water and placing them in a hot oven for 7 minutes and presto crispy with a soft interior.   I always keep two or three half baguettes wrapped in plastic in my freezer just for those days when I want fresh bread but don’t want to leave the house to get it.

← Musée Fabre and Canadian ImpressionismWhat Happened and What’s Next? →