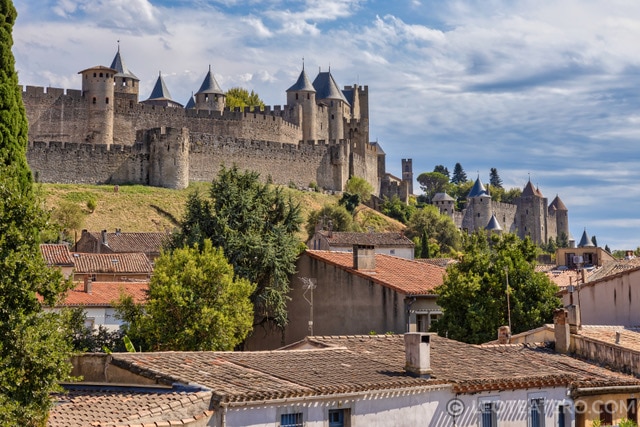 The Medieval citadels of Carcassonne otherwise known as La Cité, are one of the most visited places in France, on the same par as Mont Saint Michel, the mystical island city in Brittany.  They both have thousands of years of history, murder, mystery and mayhem.  La Cité is a fortified city located between the Pyrenees Mountains, the Massif central mountain and the Mediterranean Sea in the south of France.  Sitting high on a hill in a valley overlooking vineyards on the banks of the Aude river, in the region known as the Garrigue.   It’s a massive fortress with 3 km of grand ramparts, and 53 grey slate topped towers, covering 13 hectares of land.   The site itself has been a strategic location for thousands of years dating back to the Neolithic era, and later was the seat of power for the Romans and Kings of France.   La Cité is surrounded by the modern city of Carcassonne.

There is a legend that Carcassonne received its interesting name in the 7th century, after King Charlemagne tried to take the city and remained in siege outside the city for 6 years.  The princess, Dame Carcas, was the leader of the knights following the death of her husband, Prince Balak.  The princess ordered an inventory of the stock left only to discover that they had one pig and one bag of wheat.  She decided that they should feed the pig the wheat and then hurl him at the feet of Charlemagne from the tallest tower in the city.  Upon finding a fully bloated pig filled, Charlemagne decided that the city must have a huge number of provisions to afford wasting a wheat fed pig.  The ruse worked and Charlemagne withdrew his army.    The Princess, overjoyed with her plan, began to ring the bells in town and one of Charlemagne’s men said “monsieur, Carcas … sonne!”, meaning “Carcas” is ringing.   Et voila, the name Carcassonne was born.

Once it had become a part of the Royal domain, the destiny of La Cité changed greatly.  Under the successive reigns of Louis IX, Philip the Bold and Philip the Fair, it began to take on its present-day appearance with huge ramparts and towers dominating the landscape.  A new town was born in 1260 on the left bank called the Bastide Saint-Louis.   It was burned down in 1355 by the Black Prince, but it was immediately rebuilt.  Whilst this new town became a hive of activity, la Cité affirmed its position as a Royal fortress.   It is now a UNESCO World Heritage Site and is protected.

One of the Roman towers housed the Medieval Inquisition.  You can tell that it is Roman because of the style of the shallow-pitch terracotta tile roofs and red brick layers on these two towers.  Sadly, hundreds of years later, it became home to the Medieval Inquisition, whose purpose was to root out and prevent the spread of Cathars and Waldensians—followers of religious movements that were denounced by the Catholic Church and cruelly tortured.   There is even a museum dedicated to this, located in La Cité.

Today, there are about 50,000 people who live in the modern city of Carcassonne adjacent to La Cité, with 250 actual people residing within the city walls of La Cité.  The rest of the population is spread out in the modern city that surrounds the fortress.  Present day life behind the ramparts is hardly medieval.  The vibe that reigns in its squares with its terrace bars attracts many visitors but also the locals who never tire of the beauty of the place.

The area of the Bastide in Carcassonne, located on the left bank of the river Aude, grew thanks to the textile industry.  In the 17th century the bourgeoisie and the most important personalities lived in this part of the city.  The Medieval City had become unsuited to new war techniques and was too far from the new frontier.  Even the Bishop had come to settle in the lower town and left la Cité.

The Bastide Saint-Louis area is a beautiful checkerboard organized around a central square in the heart of modern-day Carcassonne.   Another area outside of La Cité in the city of Carcassonne, is Place Carnot, which is lovely, and at its heart is the Fountain of Neptune created by the Italian father and son sculptors Barata in 1771.   A fruit and vegetable market takes place every Tuesday, Thursday and Saturday morning in its central square, Place Carnot, known as Place aux Herbes in 1852 and a meeting place for Carcassonnais.  You can visit churches, mansions or just stroll in the shade of the foliage teeming from the public gardens.   Today the Bastide is the nerve center of modern-day Carcassonne.  Every morning from Monday to Saturday, visitors as well as locals are transported by the authentic smells and flavors of local products to the covered market in Les Halles, a former grain hall, where once the grain trade and measures were found.  La Bastide is above all, a place of life with its pedestrian street going from the Portail des Jacobins to the train station for tours of the city.  This street, as well as the adjacent alleys, is dotted with boutiques, fleurists, boucheries, fromageries, wine merchants and antique shops.

In the Bastide, there is also a free Museum of Fine Arts called Le Présidial.  It has a small but mighty collection of paintings from the 17th to the 20th Century. The collection of glazed earthenware is also worth checking out as well as the tapestries and objet d’art.

The entire city of Carcassonne is also known as a gastronomical destination too.  Many of the local products are farm based and inspired by traditional recipes of the south of France.  You can easily find terrines of meats and vegetables, local smoked ham and confit de canard.  Duck liver pate, artichoke salads with cured pork liver, and countless stews like my favourite, Cassoulet are everywhere.  Cassoulet is made from dried white beans, pork meat and rind, sausages and goose or duck confit.  It is simply one of the best comfort foods in France, and easily accessible throughout the entire country.  The history of Cassoulet dates back to the 16th century, when the bean arrived from far off America.  Traditionally a peasant dish, the housewives would leave this simmering over the fireplace adding ingredients they had each day.  Its name comes from cassole, the terracotta plate in which it was traditionally prepared.

The Grand Festival de Carcassonne takes place every year in July.   Events ranging from theatre, classical music performances, opera and a variety of modern concerts are the main themes for the festival.  More than 80 free concerts are held at different spots throughout the city.   It remains a nationally renowned festival.   This year’s festival highlights include Angelique Kidjo and Catherine Ringer (from Les Rita Mitsouko), Deep Purple, Frances Cabrel and Matt Pokora.

There are also Medieval Jousting events taking place between July and August in the tiltyard.  Here, in this grandiose setting, the knights face up to one another in combat to the thunderous sound of horses’ hooves.  Carcassonne is also known for their Christmas decorations.  The entire city lights up with street theatre and magical illuminations, along with providing a beautiful setting to purchase artisan gifts and provides a beautiful setting to purchase artisan gifts.

A wonderful historical tradition takes place on Bastille Day, aka the 14th July, France’s national holiday.  Over 125 years ago, on 14th August 1898, the Cadets de Gascogne entered Carcassonne. This delegation was made up of literary, artistic and political personalities.   It was a grand occasion for the people of the city and so they organized a magnificent feast in honour of these prestigious visitors.  To conclude the festivities, they used Bengal lights to simulate a fire and transform the Cité into an enormous shimmering stone. It was such a success that they decided to keep this tradition of fire going, and to do the same thing again every year on 14th July at 22h30.   It’s stunning to see the city dressed in red lights.    One of the best places to see the fireworks from outside the walled city, is from the new bridge, the Saint Hilaire road, the banks of the Aude on the old bridge side or the heights of Grazailles.  You can admire the incredible waltz of sparkling shapes.  The spectacular fireworks make it appear like la Cité is on fire.  Truly an amazing lightshow.

The citadel was restored at the end of the 19th century and in 1997 it was added to UNESCO’s list of World Heritage Sites.   A part of the medieval city is managed by the “Centre des Monuments Nationaux” (national monuments organization).  Carcassonne is located east of Toulouse and west of Montpellier in the Department of Aude.  Access the Motorway A9/A61: exit 24 “Carcassonne Est”, and then take the D6113 towards Carcassonne, following the signs for Cité Médiévale.  There is also a regional airport located on the outskirts of the city.  Flights by Ryanair to England, Ireland, Scotland, Belgium, the Netherlands, Denmark and Portugal. When visiting the city during big events, do not park in the city centre, as you will spend hours trying to leave the small city. Instead park near the edge and take public transport into town. You’ll thank me later.

So take the time this summer to step back into Medieval times and visit La Cité and Carcassonne.