The Château de Chenonceau is a French château spanning the river Cher (no relation), near the small village of Chenonceaux in Loire Valley.   It is the very first Chateau I toured on my first trek to the motherland and still to this day remains my favourite by far.   Not just because it is beautiful, but because it has so much life to it.   It’s rich with a history of battling royals, heiresses, artists and financiers and even the French revolution.

It is the best-known châteaux of the Loire valley and its image evokes the idea of the marriage between nature and architecture.   Second only to the main royal residences of Versailles and Le Louvre, Chenonceau is the most visited castle in France.   As a former Royal residence, it was built, loved, managed and protected by several remarkable women.   Chenonceau’s story begins during the French Renaissance and is also the story of the most famous royal love triangle in French history. 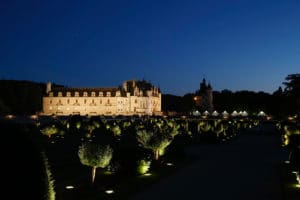 In 1515, Thomas Bohier, revenue collector for King Francis I, began the construction of the Château de Chenonceau.   Twenty years later, King Francis I would seize the chateau for unpaid debts from Bohier’s son and it became one of the many castles belonging to the Crown.

Meanwhile, the brother of the Dauphin (the Heir & Prince) of France, Henri married Catherine de Medici, a member of the ruling family of Florence, in 1533, when they were both fourteen years old.   At this time, his eldest brother was alive and there was little prospect of Henri coming to the throne.   The following year, he became romantically involved with a thirty-five-year-old, Diane de Poitiers.   Widowed, Diane adopted the habit of wearing black and white, a personal trademark for the rest of her life.   When his elder brother Francis, the Dauphin and Duke of Brittany, died in 1536 after a game of tennis, Henri became heir apparent to the throne.   He succeeded his father on his 28th birthday and was crowned King of France in 1547.

As the story goes, King Henri II excluded Catherine from participating in state affairs and instead showered gifts on his favorite (mistress), Diane, who wielded much influence over him.  One of these gifts was Chenonceau.  Soon she became obsessed with it and commissioned an architect to build the famous bridge on the Chateau, that crosses the river Cher.   She also oversaw the planting of the extensive flower and vegetable gardens along with orchards to supply the Chateau with fresh produces, which are in use today.  The gardens were considered among the most spectacular of the era, paling only to Diane’s great beauty.   She was considered to be one of the most beautiful and wealthy women of her era. She had a strict beauty regime, including a daily early morning bath in the Cher.  She also was the subject of a large number of paintings and sculptures some of which sit in the two main Royal Palaces today. 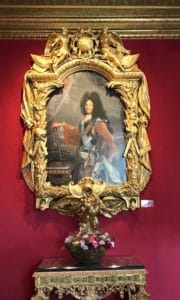 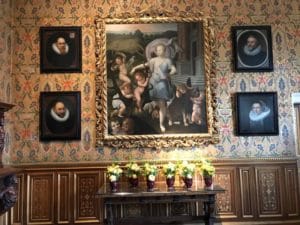 The Queen, Catherine de Medici and the mistress, Diane de Poitiers were both descendants of the same family – La Tour d’Auvergne.   Their lives were very much intertwined.    Diane made sure that Henry’s visits to his wife’s bedroom would be frequent eventually producing 10 children together.  In another act of preservation of the royal family, Diane helped nurse Catherine back to health when she was ill.   Diane was in charge of the education of her and Henri’s children until 1551; her daughter Françoise even managed the queen’s servants. Diane de Poitiers would remain Henri’s lifelong companion and for the next 25 years, she would be the most powerful influence in his life and the most powerful woman in France. 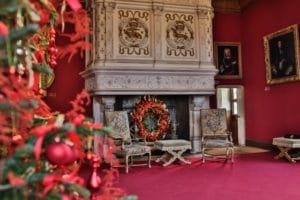 However, things changed quickly when upon Henry’s death, Catherine was thrust into the political arena as mother of the frail fifteen-year-old King Francis II.   As the King’s widow and Queen Regent she forced Diane to give up Chenonceau in exchange for Chateau Chaumont and took up residence.   The Queen added Chenonceau‘s two-story gallery located on top of the bridge, where she organized sumptuous parties during her regency.  She went on to add another separate, but more formal garden located beside the original ones designed by her friend and rival.  Today when touring the Chateau you will find the two bedrooms of Catherine and Diane intact and on display, as well as their two gardens duelling it out forever. 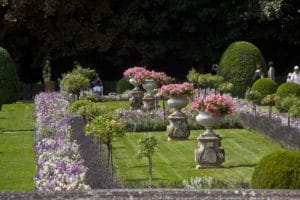 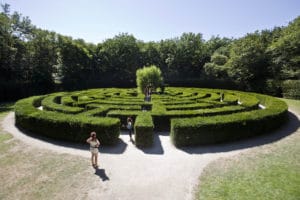 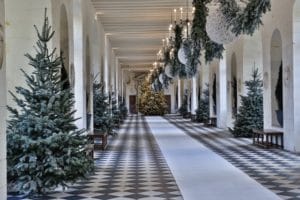 On the death of Catherine, Chateau Chenonceau was passed to her belle-fille (daughter-in-law), Louise de Lorraine wife of the King Henry III. Sadly, he too died soon after and Louise began wearing all white and devoted herself to prayer.  Her bedroom, which is also on display, has been decorated in black and white.  Its somber nature is very chilling when you enter the room. Her death marked the end of Chenonceau’s Royal history. 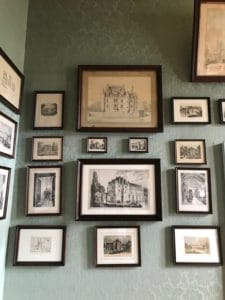 Chenonceau was then given a second life, when Louise Dupin brought celebrations back to the château where she held a literary salon during the Age of Enlightenment. The daughter of financier and actress, she surrounded herself with great philosophers like Condilliac, Voltaire and Rousseau.  She even managed to preserve Chenonceau during the Revolution by arguing that it was the only bridge for miles and it was needed for travel and commerce.

Its next owner, Marguerite Pelouze, another heiress decided to make the monument and its park the theatre of her success. She spent a fortune on its restoration, including adding the statues to the gardens. However she ran out of money and ended penniless and ruined. 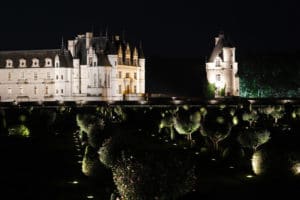 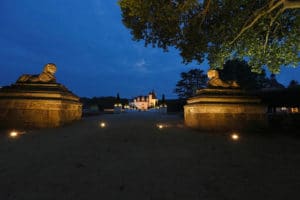 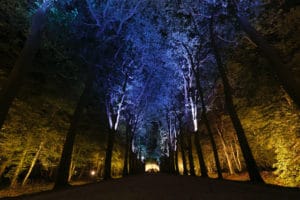 The final owner was the Menier family (the famed chocolate makers), who still own and operate Chateau Chenonceau today.   During the 1st World War, Gaston Menier, then owner of Chenonceau and the Member of Parliament for Seine et Marne, suggested to the War Ministry that he bear the costs of setting up a temporary military hospital in the château and meet all its operational costs.  So, 120 beds were installed in Catherine de Medici’s great galleries with the black and white tiled floor rising up over the Cher.  On the ground floor, a state-of-the-art operating theatre was equipped with one of the first X-ray machines of its time.  Just under 2500 injured soldiers, mostly very seriously wounded, were cared for here. 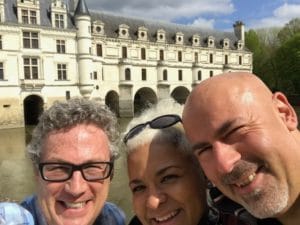 Another important thing about Chenonceau besides being former Royal residence and a wartime hospital is its beautiful gardens and grounds. The floral kitchen garden provides more than a hundred varieties of flowers for cutting to decorate the château. There are floral workshops in the courtyard of the farm; located in 16th century buildings, opens its doors to visitors who wish to see it.

Francois Boucher is responsible for the flowers at the Chateau. You can find him there in the gallery twice a week making flower arrangements in front of the guests and hosting the floral workshops. On my recent trip to Chenonceau, I had the pleasure of watching he and a colleague creating beautiful arrangements in the Gallery. His work as a florist is exceptional. So much so, that he has earned the title Scénographe floral et Meilleur Ouvrier de France (Floral designer and best craftsman of France).   It is a craftsmen competition for florists held every four years and comparable to the Michelin Stars for Restaurants. The medal ceremony takes place at the Sorbonne hosted by the President of France. 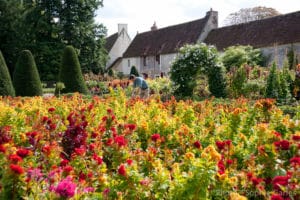 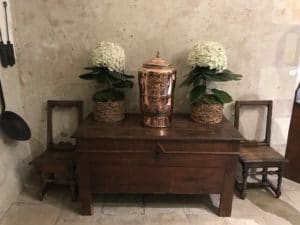 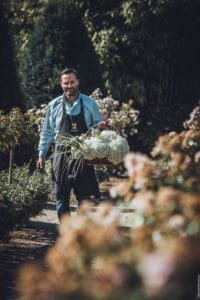 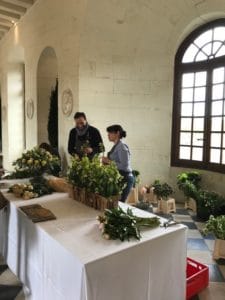 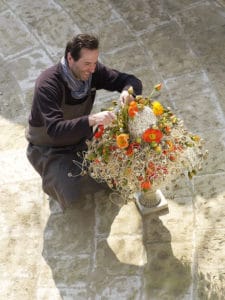 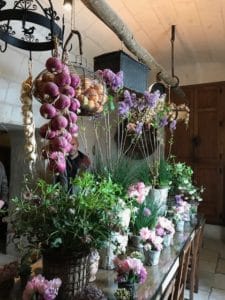 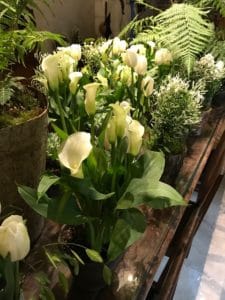 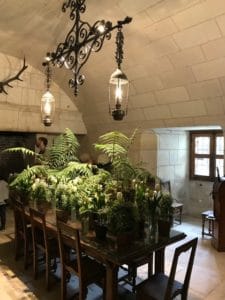 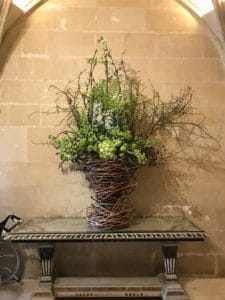 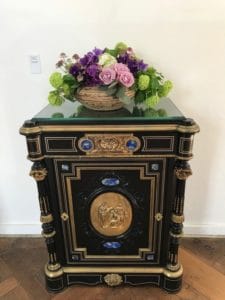 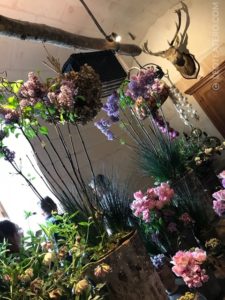 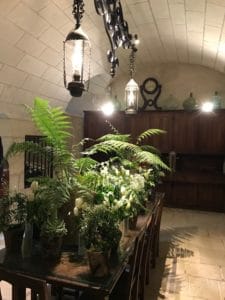 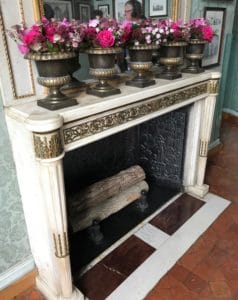 Chenonceau is an example of the most beautiful reflection of refinement and excellence in France. But for me a source of inspiration to home, garden and life.

PS – many of the photographs are provide courtesy of Château de Chenonceau, the rest are mine.