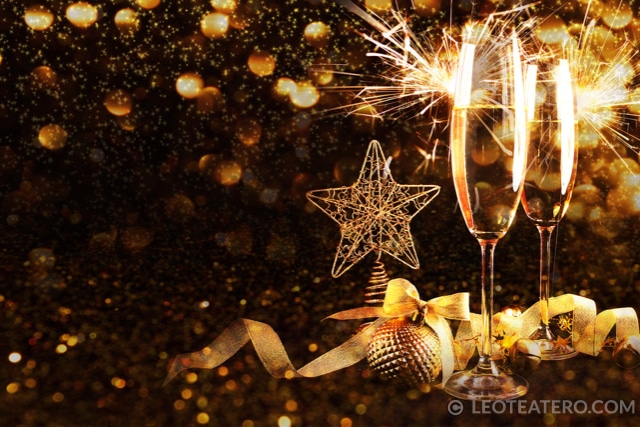 Christmas time in France is quite spectacular and is indeed the biggest celebration time of the year.  While other countries have their traditional Christmas meals and foods, their importance often seems on the same level as things like carols, films, decorations, and so on.  But in France, family and food are what seems to make the holiday so special.

There is a commercial side to Christmas in France, but the celebrations are above all a time to get together. And so many people travel far distances to visit relatives from both sides of the family. Like in North America, all children return home from school to celebrate the holiday.

For years, when we lived in Canada, we would travel to France every other year for the holidays to celebrate Christmas will my belle-famille (the in-laws). But now that we are installed in France, it actually feels more like Christmas because we are not travelling during the holidays and for the first time in years, we decorated our home and a Christmas tree.

When it comes to celebrating, there’s less opportunity for people to get up in arms about Christmas anyway, since things like Christmas pageants or concerts in public schools don’t exist, and non-Christians tend to be relatively private about their faith. This is because one of the principles of the French Republic is laïcité – secularism. The separation of church and state is taken very seriously here.

Christmas Mass – On Christmas’ Eve, the midnight mass is part of the French traditions of Christmas as France is mainly a catholic country, however not everyone will be joining the church on that night. The religious service usually starts either at the stroke of midnight or a few hours before in all the cathedrals and parish churches all over France. Families get together in prayer and carol singing in celebration of the birth of Jesus Christ which tradition believed to have occurred at night.

Christmas Eve Dinner.  Traditionally eaten after attending Christmas Eve Mass, this feast is extraordinary and starts around midnight.  The French gather for a huge meal called Le Réveillon, which derives from the word ‘réveil’ meaning ‘awakening’. The dinner is late therefore usually quite light, made up mostly of canapés and champagne or other sparkling wines. Friends are often invited for this dinner, while the Christmas day lunch is usually a family gathering. In the southern parts of France, along the Mediterranean, where we live, seafood and oysters are big on this light menu.  Foie-gras is a must, and often smoked salmon or fish eggs canapés can nicely replace caviar. Remember to eat Foie-gras first and salmon or fish afterwards, as the fish can overpower the subtle taste of the Foie-gras. Of course, nothing says French Christmas celebrations like Champagne or mulled wine and there are usually lots of both on hand.  Sweet wines and liqueurs are also popular during that period thanks to delicious pairings with foie-gras and cheeses for example.

Christmas Day Lunch.  There is no national tradition for the big Christmas lunch, and often menus are based on local products and regional cuisine, each family also having its own tradition. The Chapon is often cooked.  It is a castrated rooster smaller but tastier than a Turkey. Our family’s tradition is a fondue bourguignonne, which is basically a beef meat fondue served with various sauces.

Christmas Day Breakfast.  Depending on the region the tradition changes somewhat.  For our family, it was an Alsatian breakfast complete with Kugelhopf (or kouglof), and jams.  Of course gifts were opened around the Sapin before breakfast.   A family hand-embroidered Alsatian tablecloth was reserved for this yearly occasion. An interesting French Christmas tradition is that the French knot the ends of the tablecloth so the Devil can’t get under the table.

Le Sapin/l’Arbre de Noël – these are sold at most every florist or floral shop in France.  They are smaller by nature and are actually placed in log bases, unlike ones in North America.  Strasbourg claims to be the origin of the traditional Christmas tree. In the middle ages the Alsatians played ‘Games of Paradise’, which depicted the history of creation and always featured a fir tree covered in apples in front of the churches. The custom of having a tree decorated with apples and biscuits in the home quickly became popular. One year, when apples were scarce, glass-blowers produced decorative versions and thus the Christmas ornament was born. The tradition quickly spread around the world in the late 19th century, as the Alsatians fled to escape war.  Every year there is a giant Christmas tree in Place Kléber in Strasbourg.  In Montpellier the Christmas tree this year is a giant manège (amusement park ride) for kids.

Crèche de Noël – Santons de Noël. The crèche is a nativity scene displayed in many French homes and in all churches. In Provence, there are little clay figures called santons (or little saints) of all sizes in the crèche, often dressed-up in real doll clothing, which you can buy from Christmas markets or from local artisans. Even though the most famous ones are from Provence, other regions and countries have similar traditional figures. There are plenty of pieces available for sale so you can create a little or big crèche at home. My belle-famille has about 100 characters and they are adorable!

In Catalunya, towards Spain, the tradition of the live nativity scene called Pessebre is still strong, and involves singing by the participants. They are performed at various times during the Christmas season in Churches or Religious Centres.

The Bûche de Noël.  During the period running up to Christmas, the windows of boulangeries and patisseries turn into beautiful displays of glistening cakes and colourful pastries. The centre of attention however are the bûches de Noël, or Christmas logs, made out of every type of chocolate there is or with fruit and cream. These decadent cakes consist of a light sponge coated in chocolate or cream, which is then rolled to make a log. It is then iced with more chocolate or cream and decorated to look like a log. It’s the usual dessert course during the Réveillon.  I had the pleasure of learning how to make this with my belle-mère. During a Parisian Christmas eve dinner, we were once even presented with a sushi-looking bûche, from a very trendy Japanese pastry shop. Most families still prepare their own bûches, and often kids gather around to help with the baking.

Marché de Noel.  Christmas markets are very popular in France, although perhaps originally a German and Central European Christmas tradition. There are a few towns and villages in France where artisans produce, gifts and local culinary delicacies, such as foie-gras and confit de canard, are sold. The oldest Christmas market in France is Strasbourg’s Christkindelsmärik and can be traced back to 1570. The market has more than 300 chalet stalls arranged across 11 areas of the city selling arts and crafts, food and Alsatian Christmas decorations. For any trip to Alsace at that period, visiting the market is a must.

Epiphany.  Christmas celebrations are brought to a close on 6 January at Epiphany. This celebrates when the three kings first saw baby Jesus. While in Canada and Britain this day passes almost unnoticed, in France it is celebrated by everyone with a galette des rois (cake of the kings). You will see these in every bakery and supermarket throughout the month of January.  It is a flat cake of puff pastry filled with marzipan and traditionally it contains a fève (originally a dried bean, now more often a small toy).  The southern tradition involves more of a brioche-type cake covered with dried fruits and sugar. The tirage des rois is loved by children. The youngest crawls under the table as the cake is cut and dictates who should receive each slice. The person who finds the fève in their slice becomes king/queen for the feast or the day, and gets to wear a crown and choose their queen/king.

While we still miss walking in a winter wonderland, I must admit that I do enjoy having a green Christmas.  Most of the other regions of France have snow (not like in Canada), but a beautiful sprinkling of neige.  In the south of France, snow is quite rare and the temperature drops to around 5 to 10 degrees during the day, making Christmas feel a little more light spring.

I hope you enjoyed this blog of Christmas in France, and if you know of any other French traditions that I may have missed, please let me know! I would love to hear from you and with that, I wish you all a Merry Christmas!

← The Gift of GivingA New Year: Looking Forward →
Manage Cookie Consent
To provide the best experiences, we use technologies like cookies to store and/or access device information. Consenting to these technologies will allow us to process data such as browsing behavior or unique IDs on this site. Not consenting or withdrawing consent, may adversely affect certain features and functions.
Manage options Manage services Manage vendors Read more about these purposes
View preferences
{title} {title} {title}
Scroll To Top