After a spending a few days in Paris we toured the picturesque and quiet Château de Fontainebleau.  With over 1500 rooms at the heart of 130 acres of parkland and gardens, Fontainebleau is the only French royal and imperial château to have been continuously inhabited for seven centuries.  Château de Fontainebleau can proudly claim to have been a sovereign residence to 34 Kings and 2 Emperors.  The Capétiens, Valois, Bourbons, Bonapartes and Orléans, all members of French ruling dynasties, have lived within these walls from the middle ages to the second empire.

We were lucky enough to visit the chateau with one of our uncles, a former Classics Professor from Paris. As we toured the chateau he recounted tales of the Kings and Queens who lived here, and in some cases actually born and died here.

The name of “Fontainebleau” is very old, much older that the chateau itself. The simplest explanation and most of given, is that the name comes from the contraction on the words “Fontaine-belle-eau”or “Fontaine de Bléau”.   As you enter Fontainebleau palace from the town, there is a beautiful royal gate that leads to the palace grounds, which houses large courtyards and beautiful fountains and pools. Then comes the horseshoe shaped staircase, which leads into the palace. The palace is the largest French royal building, which is arranged around a series of courtyards and parks. It is also known as the dictionary of architecture.

From the very outset when Fontainebleau was build, vast gardens, pools and fountains surrounded it.   Kings and queens, emperors and empresses have all striven to make their own improvements to the château built around the original keep. The estate quickly became a huge palace in which many momentous historical events have played out. There are 1530 rooms in the château, and 4 museums: the Empress’ Chinese Museum (Napoleon II’s wife Eugénie collected Chinese objects), the Napoleon I museum, the Painting Gallery and the Furniture Gallery. 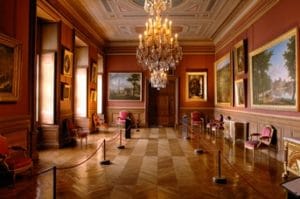 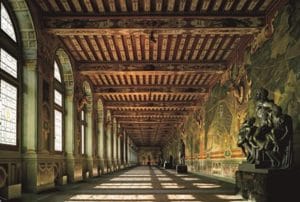 Located 55 kilometers south of Paris, it was a popular place with the royals because of the abundance of wild game and natural springs.   Its origins started in the 12th century with the construction of a fortified castle and later in the 13th century a Trinitarian monastery, whose monks would eventually oversee a hospital.   Later a new Trinity Chapel would be built in the palace.  The Forest around it was filled with excellent game and it was home the chasse à courre (hunting with hounds) for the Kings, something that still takes place today. 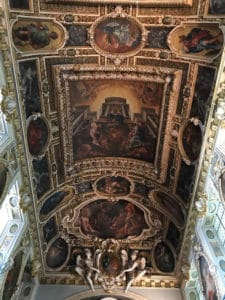 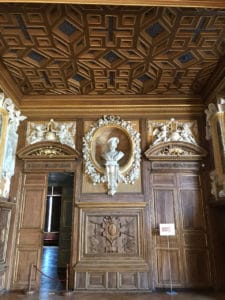 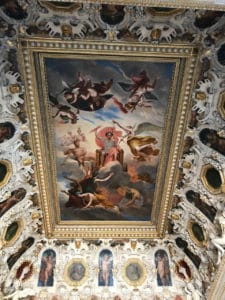 During the Renaissance in the 15th century, works began under Francis I, which gave the building the appearance it has today. Francis began other major additions to the chateau. Using land on the east side of the chateau purchased from the order of the Trinitarians, he began to build a new square of buildings around a large courtyard. Following the death of his father, the next King, Henri I and his wife, Catherine de Medici chose the architects Philibert Delorme and Jean Bullant to create a new Italian French Renaissance style. They extended the east wing of the lower court, and decorated it with the first now famous horseshoe-shaped staircase.  At Henri’s orders, the Nymphe de Fontainebleau was installed at the gateway entrance of Château d’Anet, the primary domain of Henri’s primary mistress Diane de Poitiers (the original bronze lunette is now in Le Louvre, with a replica in place). After the death of Henri II, his widow, Catherine de Medici took over the reigns of Fontainebleau and ordered a moat to be built to protect the castle during the War of Religions. As you may recall from my previous blog on Château de Chenonceau, Catherine de Medici put her stamp on any of the Royal palaces in France. 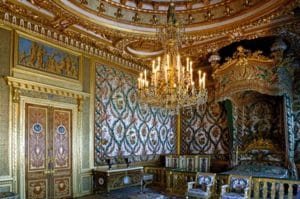 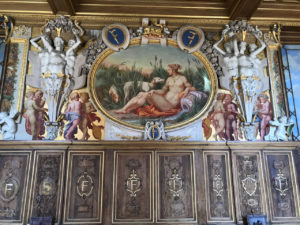 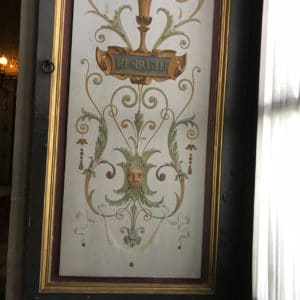 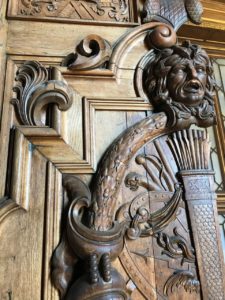 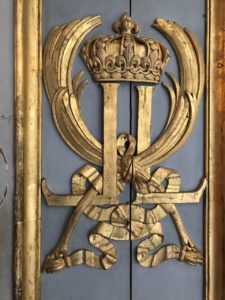 During the first French revolution that Chateau miraculously survived the anti-royalty destruction madness of the revolutionaries, but most of its furniture was sold at auction. Preparing himself to become Emperor, Napoleon wanted to preserve as much as possible the palaces and protocol of the Old Regime. He chose Fontainebleau as the site of his historic 1804 meeting with Pope Pius VII, who had travelled from Rome to crown Napoleon Emperor. Napoleon had a suite of rooms for Pope Pius VII, whom he held captive for 19 months due to political disagreements with the French Emperor. Napoleon went on to have the entire chateau refurbished and decorated. The bedroom of the Kings was transformed into a throne room for Napoleon. Apartments were refurbished and decorated for the Emperor and Empress. 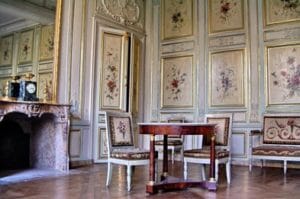 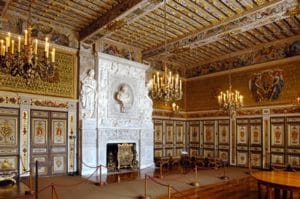 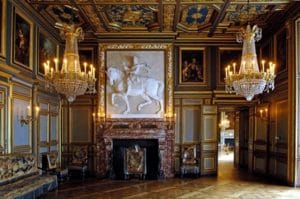 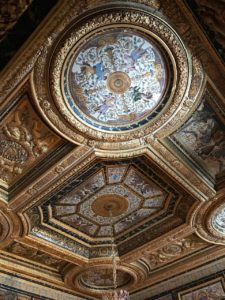 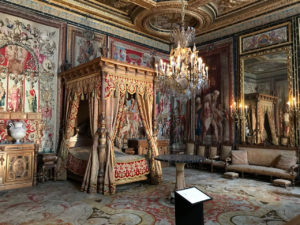 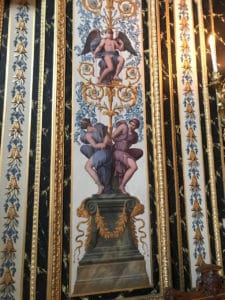 The current museum today houses many fantastic examples of Italian Renaissance style, which was adapted to French design as well as the new Empire and Empire II styles. The Great Apartments, which house several function rooms, galleries and apartments are unique in France and still have the astounding decoration of frescoes and stucco work produced by Italian artists. The Sovereign’s apartments were used by the monarchs and their courts as private apartments. Other parts of the castle include the Pope’s or the Queen Mothers’ Apartments, the Napoleon I Museum, the Chinese Museum, Trinity Chapel, the Turkish Boudoir of Marie-Antoinette, the Empress’s Salons and of course the beautiful Gardens.

During World War II, the Germans occupied it during two brief periods. Later it was home to the Allied Forces Central Europe and NATO, until 1966. The general restoration of the Chateau took place between 1964 and 1968 under President Charles DeGaulle. And in 1981, it was classified as a UNESCO World Heritage Site.

On 1 March 2015, professional thieves robbed the Chinese Museum of the Chateau. They broke in at about six in the morning, and, despite alarms and video cameras, in seven minutes stole about fifteen of the most valuable objects in the collection, including the replica of the crown of Siam given by the Siamese government to Napoleon III, a Tibetan mandala, and an enamel chimera from the reign of the Quianlong rulers (1736–1795).

The town of Fontainebleau can be easily reached from the center of the Paris, as there are number of trains daily to and from Gare de Lyon station.   An alternative to the grandeur of Versailles and the bustle of Le Louvre, Château de Fontainebleau is an easier more relaxing tour of a large French Royal Palace.   It is a place that one can visit in a morning or afternoon, 3 to 4 hours is plenty of time to see most everything.

PS – I would like to thank the Chateau Fontainebleau for the use of the lovely photographs.  The rest were taken by me.

← The Best Brunch Ever!Scotch Whisky 1.0 →
Manage Cookie Consent
To provide the best experiences, we use technologies like cookies to store and/or access device information. Consenting to these technologies will allow us to process data such as browsing behavior or unique IDs on this site. Not consenting or withdrawing consent, may adversely affect certain features and functions.
Manage options Manage services Manage vendors Read more about these purposes
View preferences
{title} {title} {title}
Scroll To Top