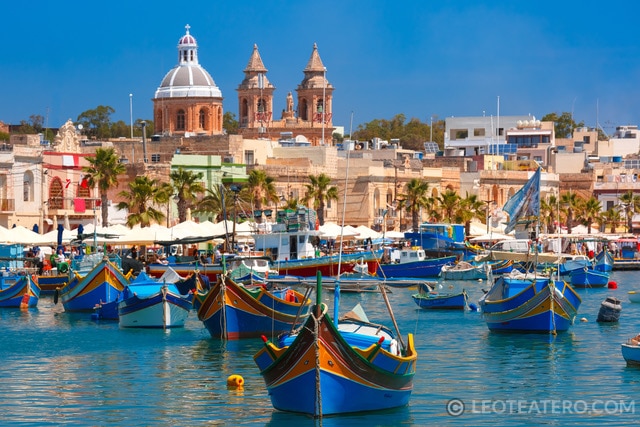 In December, we had the pleasure of visiting friends who now live in Malta, the smallest country in the European Union.  Malta has a grand population of 515,000 Maltese, with 20% being non-Maltese Nationals.  One you have visited the island nation you can easily see why – the islands are some of the most beautiful places on earth.  The country is formed by five islands in an archipelago of 21 islands (most uninhabited), located just below Sicily and north of Libya, in the Mediterranean Sea.  It has over 10,000 years of history and is steeped art and architecture as well as home to Megalithic Temples which are some of the oldest freestanding structures in the world.

Malta’s incredible prehistoric temples that go back thousands of years, and are much older than Pyramids of Egypt.  Imnajdra and Ggantija are even older than Macchu Pichu in Peru.   Ggantija is located on the island of Gozo and is a temple dedicated to fertility.  We took a tour of the three temples (two finished and one incomplete) and were amazed at the beauty and history of the place.  Remember, this place was built before the wheel was invented, so image the amount of work it must have taken to construct these huge temples.  Imnajdra is located on the main island of Malta and is equally impressive.   Its structure is aligned for the spring and fall equinox.  I recommend you visit both of these UNESCO World Heritage Monuments, if you are coming to Malta.  They are a must see.

Malta has a most unfortunate reputation of being one of the most conquered places on earth.  Mostly because of its strategic location in the Mediterranean Sea but also for its fishing too.  The first known civilization started around 5900 BCE with farmers inhabiting the island.   Sadly, they died out because of climate change, lack of fresh water and their bad farming practices that ruined the spoil.  Fifteen hundred years later the island was populated by another group of people (the ones who built the monolithic temples).   But after a thousand years, they too disappeared.   Later, during the Bronze Age, another thousand years later, it was populated by Sicilians.  They later were conquered by the Romans and then the Greeks.  Eventually the Muslims invaded and took over the island in 870 CE and left a permanent mark on the language of Malta.  But again, it was conquered by the Normans (Sicily), the Aragonese (Spain), the French in the 18th century and later by the British.  It gained independence in 1964 but remains a member of the Commonwealth and has many British roots and traditions.  For example, they have the red telephone booths of England and British electrical sockets.

We stayed on the main island of Malta in picturesque Sliema, which was filled with restaurants, shops and boat tours connecting to the rest of the island country.  It was definitely the most crowded area of Malta and is home to a lot of expats and very central to access everything.  We took the 5-minute ferry across the water to Valetta.

The city of Valetta was founded by and named after the 49th Grand Master Jean de la Valette.  Valletta was to be not only a fortress city with a modern hospital, but the cultural home to some of the finest works of 16th – 18th century Europe.   Vallette himself was buried in the city.

We were lucky enough to be able to get a tour of Sacra Infermeria which was built by the Maltese Knights of St John of Jerusalem, located adjacent to Fort St Elmo and overlooking the Grand Harbour in the city of Valetta.  First built in 1040 CE, the Knights were world renown, they established the first a monastery, hospital, school and military on the island.   The Infermeria is set in a huge building perched on the coast, but descends 6 floors below with many secret passages and exits, including ones that are dead-ends.  The Grand Masters always needed to have a perfect escape route.   The hospital had two wards, one for the rich located in the 155m main hall, whose patients arrived by the front door and the other underneath the main hall (of equal length) for the poor, who arrived via one the famous secret passages.  No women were allowed in the building while the order was here.   An ancestor of my husband’s side of the family was the doctor-in-chief at the hospital from around 1798 to 1800.   It later became a police station but now the Mediterranean Conference Centre with state-of-the-art technology housed within the cavernous limestone building.

Saint John’s Co-Cathedral is also located in the center of Valetta.  It’s a stunning cathedral filled with beautiful carvings and art, including Caravaggio, the Italian painter from the 15th century.    The cathedral contains eight chapels, each dedicated to the patron saint of each of the eight languages of the order of Saint John of Jerusalem.

That is also one of the most interesting things about Malta is the multiple languages that the Maltese speak.  Many of its citizens speak upwards of six to eight languages.  While English and Maltese are the official languages, Italian was also an official language up until 1934.  In Maltese schools’ children are taught to embrace many languages including French, English, Italian, German, Russian, Spanish and Maltese.

Another area that we toured were the cities of Vittoriosa, Senglea and Cospicua, known as the Three Cities of Malta, are pieces of living history kept alive by hundreds of years of preservation, and the occasional miracle.  The fortified cities sit like a trio of villages in the heart of Malta’s historic centre, directly across the Grand Harbour from Valletta.  With a labyrinth of tiny cobblestone streets, filled with little restaurants and shops, it’s also a must see, if only for the panoramic views it offers.

Another place on the island of Malta, is the old medieval capital city of Mdina, founded 800 BC and an enclosed fort, with huge limestone defense walls.   It has beautiful homes with plenty of shops and restaurants.  Its former moat is now a beautiful garden surrounding the walled in city.  Many scenes from Gladiator and Troy as well as Game of Thrones were filmed in this city.  Game of Thrones fans will love to know that Gozo’s famous (but sadly collapsed) Azure Window provided the backdrop for Daenerys Targaryen’s wedding with Kahl Drogo.  One of my favourites scene from Game of Thrones, occurs where Queen Cersei is forced to atone for her actions by walking naked back to her palace, while a bell is rung and her accusers cry shame, shame, shame.

The second largest island is called Gozo and is less developed and much more rural by nature.  We crossed over on a ferry, which took about 45 minutes.   This is where we toured Ggantija, and the city of Victoria, where we visited the Citadella with is 360° views of the island. The Cathedral Museum has a nice collection of religious items used by the Church like crucifixes and chalices.  The Museum of Archeology will take you on a historical journey from the ancient civilizations living on Gozo until the time of the Order of Malta.  The Folklore Museum, to learn more about the local lifestyle and traditions.  The Nature Museum, about local nature and wildlife and the Old Prison, where you can visit old prison cells.  On the island you will also discover fantastic places to swim and scuba dive including the Blue Hole, a formation that allows you to enter the sea from land, but diving in this hole. The Blue Hole and the Azure window are actually side by side.

One of the greatest things we saw were the Dingi cliffs.  They are 253 metres above sea level and the highest point in the country.  It delivers beautiful 360° views of the island and is a must do as well.

After our hotel stay, we went to stay with our friends at their home.  They took us to visit Marsaxlokk, which hosts a fish market every Sunday   Marsaxlokk is a fishing port, with adorable colored fishing boats called luzzu.    Close to Marsaxlokk is St Peter’s Pool, another must-do attraction in Malta.  This natural pool is a great swimming spot and it was formed by erosion.  Everyone loves this spot as you jump from the small cliff rather than actually swim.  The only ways to get in the water is by jumping or using ladders.

Another interesting tidbit about Malta is that aside from the countless movies that have been filmed on the island, the 1980s movie Popeye starring Robin Williams and Shelly Duval was also filmed on the island with the “cartoon-like” set being transformed into a children’s water park and made from Canadian timber.  When the filming finished, the government decided to keep the space and transformed it into a tourist attraction.

We were able to dine a several restaurants, but my favourite two are Ta Kris and Georgios, both located near our hotel in Sliema.   We really wanted an authentic Maltese dinner and Ta Kris did not disappoint.  Giorgio’s is a lively Italian bistro serving all day from morning cafes to the late-night crowd cocktails.  The best table in the place is located by the front door, facing out towards the boardwalk and all the people walking by.  No need for reservations, but they are busy, you may have to wait for a table, but it will be worth it.  For more info on these two restaurants, check out Leo’s List of Top Restaurants for 2021 on TripAdvisor.

While we visited the island in the winter, we were unable to enjoy swimming in the sea, because of the temperature, but make no mistake the sea around Malta is teeming with life and beautiful.  There are many scuba diving companies on the island, as well as boat rentals (for parties and tours) all over.

One of the best things about living in France is the ability to fly to many countries easily.    The trip to Malta took a grand total of 3 hours to get there.  I love living in France.