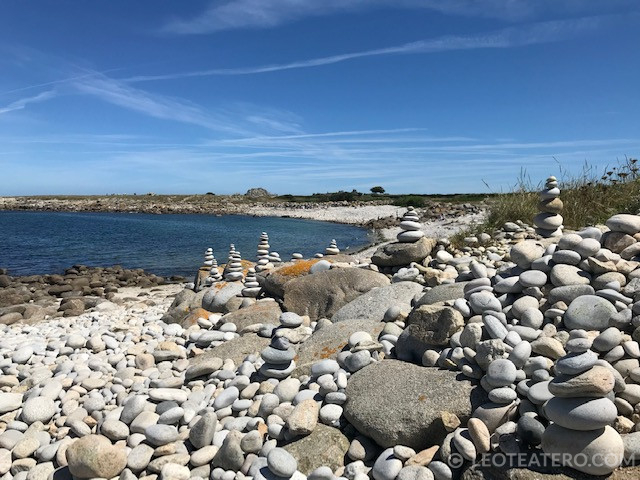 Île de Batz is an enchanting little island located a quick 15 minutes boat-ride from the port of Roscoff, on the northern coast of Finistère in Brittany, in western France.  It is where we recently had the pleasure of visiting our aunt and uncle who own a lovely house with sea view.   We spent the week being together, touring the island, biking, swimming, kayaking and eating seafood.  The island itself is really quite tiny, only about 3 km², mostly car free (except for some locals), and it features walking & cycling paths, beautiful sandy and pebble beaches nestled in the midst of a rocky coastline, and a famous exotic botanical garden that is over 120 years old.  It is a wonderful place to have a picnic or enjoy the Briton specialties in one of the local crêperies.

Home to the 464 permanent inhabitants (called in Batziens or îliens) it also is the summer homes for off-islanders, mostly Parisians.   All speak French but many Batziens also speak “Breton” aka langue gaélique (a Gaelic language).   As well, there are 87 trackers, 25 horses and 3 cows on the island.  There is of course a school and all the necessary shops for a small community, along with artisans, farmers, fishermen and tourism businesses such as hotels and restaurants, bike and kayak rentals and horseback riding.

Even though the island’s highest point is just 100 feet above sea level, it is quite hilly, and you can climb the lighthouse for fabulous views along the Brittany coast and English Channel.  Walking or biking through the numerous footpaths and routes around the island could lead you to the Trou du Serpent (Serpent’s nest), located on the far western tip of the island.  According to the legend, Welsh Monk named Paul Aurélien came to the island to save the islanders from being terrorized by a sea dragon.  As the story goes, the Saint wrapped his stole around the head of the dragon and sent him out to sea forever.  But do not look for a hole, the “nest” is an outcrop of huge granite boulders facing the sea.

We truly dined like Kings and Queens along the sea this week. Everything was made by hand together. Here is just a small taste of what we ate: Grilled Mackerel, King Crab, Blue-tailed Lobster and Grilled Sea Brill. Please check out my recipe for Rillettes de Maquereau. It’s a keeper. We also dined at a friend’s crêpiere, La Crêperie du Phare and we highly recommend too, its located just behind the lighthouse, hence the name. Phare is lighthouse in French.

The island is stunning: its micro climate due to the Gulf stream, with temperatures never dipping below zero, makes it a home to plants from all over the world, including palm trees, cacti and tropical plants, like Yucca trees.  Much of the interior of the island is made up of small little fields where the farmers grow potatoes, beets, cauliflower and onions and most planted and harvested by hand.  The land is enriched with seaweed and algae, a natural fertilizer, giving the famous Batz potatoes a very interesting taste or goût as they say in French.  The locals have been drying seaweed on their fields for many centuries, making the island rich in nutrients for farming.

It was because of this micro climate, and of course the beauty of the island, that Jardin Georges Delaselle, a botanical garden was created on the eastern tip of the island beside an abandoned church called the Chapel of St-Anne. This exotic garden was created between 1898-1918 by a Parisian, Georges Albert Delaselle, who excavated some of the island’s dunes in the form of a deep, terraced bowl five meters in diameter to protect the plants from the harsh winds on the island.  He then planted pine trees all along the edge of the basin and started collecting exotic plants. He flourished and spent his life savings on the project, but sadly in 1937, he was forced to sell the property.  It was later reworked as a summer camp in 1957, but fell into disuse and disrepair.   It wasn’t until 1987 that it was purchased, and re-invested and subsequently restored to its glory.   In 1997 the nonprofit Conservatoire de l’Espace Littoral et des Rivages Lacustres assumed ownership and today the garden is thriving with life.  Now a team of gardeners comb the oasis to near perfection.  Imagine it’s a tropical garden located on a somewhat baron, treeless and hostile land.  A testimony to the vision of M. Delaselle and his kindred spirits.

The garden contains more than 2000 plant species suited to the island’s micro climate, with an excellent collections of palms, cacti, and succulents.  Two-thirds are native to the southern hemisphere, primarily from Chile, South Africa, Australia, and New Zealand. The garden also contains a Bronze age necropolis with the remains of ten tombs.

There is evidence that people lived on the island during the Bronze Age (about 5000 years ago, when the island would have been still attached to the mainland.  In the 6th century, a Welsh Monk named Paul Aurélien became the first Bishop of Léon and a monastic community was founded at the Chapel of Sainte-Anne.   This is the same saint who later banished the dragon. Life on the island was harsh then, as this area was on a migration route and was frequently pillaged.  During the 100 year war many lives were lost as this was one of the quickest ways to invade France from the English Channel.

Seaweed then became the island’s only resource.  It wasn’t until the 19th century that Batz became affluent, thanks to its sailors who travelled the seas. The beautiful, two-story stone houses on the island, surrounded by their high walls, are testament to the good fortune of these seafaring captains.  The church and the lighthouse were also built during this period

We had the pleasure of having apéro with Batziens, Jean Marie Glidic.  A farmer, he has lived his entire life on the island and raised four children, who still live on the island too.  He is a bit of a local legend, always chatting up with the locals and tourists.  His beautiful cat follows him everywhere, even into the fields, but if he gets too far the home, the cat waits patiently for him to return.

He has even done interviews in the news and for documentaries about the island.  He told us about the murder mystery called Murders in Batz, filmed on Île de Batz and many of the locals where all in the film.   According to him, the big celebrations on the island are of course, the 14th July and the Fête de St Anne on the 26th with a parade as well.  He also regaled us with the history of the island from the British invasion in 1805 to the German occupation during the last world war.

To go horseback riding on the island, you’ll need to make a reservation at Ecuries de Batz. For those wishing to rent boats, you can do so by contacting Rêves de Mer. My aunt and uncle actually held their wedding at their home on the island. With a little planning a wedding can easily be done on the island. There are many places to rent via airbnb and also Ile de Batz Location, so if you are interested, contact me and I’ll tailor a plan for you.

In these times of Covid, it is important to find a place to relax and Île de Batz is the perfect place to disconnection form the modern world and revel in the old ways of a small island community.  Remember to be safe, wear a mask, wash your hands regularly, so you can safely enjoy this little piece of paradise.

← 7 Things You Did Not Know About Château de Menthon St. BernardDo Tank, A Place for Creation and Inspiration →