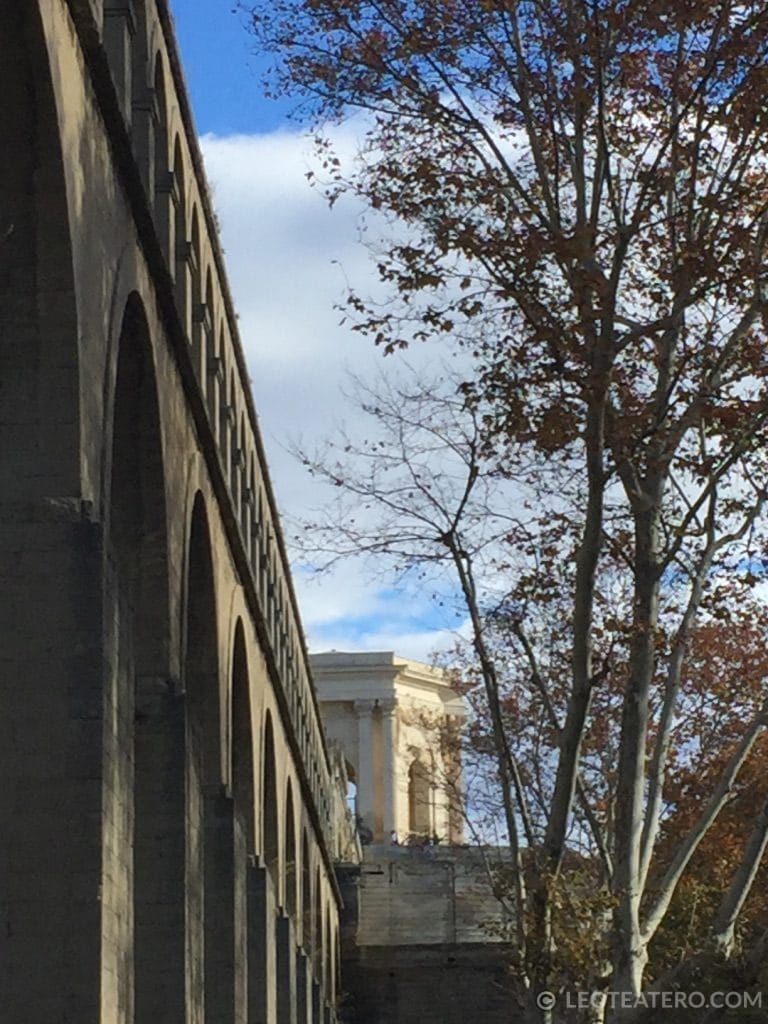 When you move to another country & culture, sometimes you can get lost in the translation.  But not me, my inner Frenchman has risen to the occasion.  I took this as an opportunity to try new ways of eating, cooking and experience food.  And there is no better place to do that than at the local markets.   One of my first acts in France was to go shopping with mes beaux-parents (my in-laws).   It was fantastic.   They had everything and it was so lively.  The market, or le marché, as it is known in French, is an integral part of life in all French towns.  In many cases le marché has been around for as long as the towns themselves and located it the very same place the town founders would have chosen.  The markets play an integral role in supplying food and services but also it is a great place for the community and social aspects of life too.

In Paris these are called marché alimentaires and they move throughout the city to difference locations every day. Virtually every French town has a market (marché couvert). Which is a permanent structure, occupied by an array of market stalls; in a classic marché couvert, sometimes called les Halles most of the stalls will sell fresh fruit and vegetables and some of the suppliers will also be local producers of meats, cheeses and catered food.  The occasional atelier selling specific services may be found, like the people who do caning, upholstering and decorative arts. You will find your neighbours shopping at the same time too.

In Montpellier, the largest Marché is called Les Arceaux and it is underneath an 18th century aqueduct named Aqueduc Saint-Clement.  This aqueduct was originally used to bring fresh water from St. Clement (a spring in the hills) to the center of town – a distance of 14 kilometers.   The Aqueduct measures just less than 900 meters, with 53 arches built in two levels, similar to Roman times.  Stone arches built over arches.  The outer base of the archway carries water up to 3 meters wide, while the interior contains water tubes covered with lead to avoid freezing.   To this day the aqueduct feeds some of the many fountains in the city center, as well as plays host to the largest outdoor market in Montpellier.   Beneath the feet of these arches, a yearlong market called Les Arceaux takes place every Sunday and Tuesday morning. Les Arceaux has two sections: fresh foods and books & collectables (albums, coins, stamps). 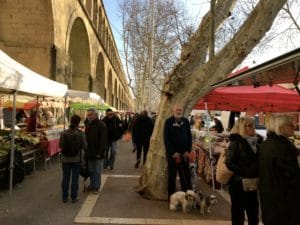 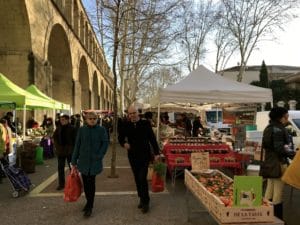 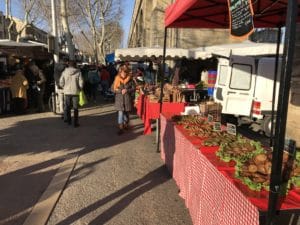 As I prepare to hit the market, I always remember to bring the adequate bags.  Trying to reduce one’s carbon footprint should always be front and centre in your mind. I bring bags for bottled items, for meats, for vegetables and a big Ikea bag just in case.   A lot of people in France use little shopping carts or strollers, but I find them cumbersome. Oh and bring lots of change, the vendors appreciate it.  I head out of my home in L’Ecusson north towards Le Peyrou, I begin a general shopping list, but I also count on making some meal decisions on site, depending on what is in season, fresh and available.

From the direction I arrive, I first pass through the booksellers and collectors market. Here you can find interesting coin, stamp, stones or pins.   There are always some little pop art items, a few small antiques, dishes and some silver.   Half way through this area, you pick up the scent of the wonderful things ahead.

The food market is spread over one side of the arches, with a large pathway down the middle.   Everything here is portable, and is set up around 6am and must be gone by mid-afternoon.   Rolling carts, the occasional Airstream trailer turned pop-up café or boucherie (butcher).   Here you will find wonderful terrines, foie gras (goose liver), herbed hams and cheeses. Some stands cook their food on spot along with 4 foot frying pans of prepared foods such a Paëlla au poisson ou poulet (Spanish stir-fry fish and chicken), encornets farcis (stuffed squid), curry de cabillaud (curried cod), Tian de legumes (vegetable tarts), tielles (octopus tomato pie) and fresh galettes (tarts and pressed cakes). Every conceivable type of confiture (jam) is available, many is interesting combinations such as cantaloupe (melon) and lavender jellies. Spices of all kinds, oils, dried nuts; olives and oil are for sale. 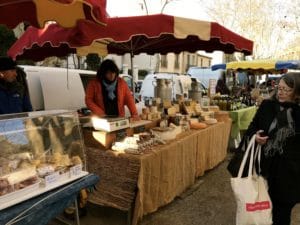 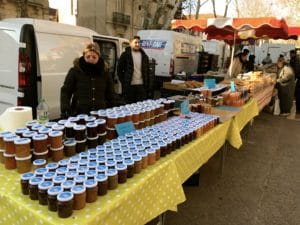 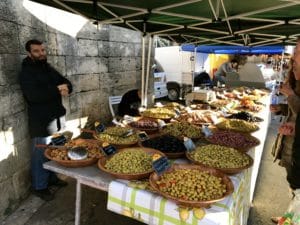 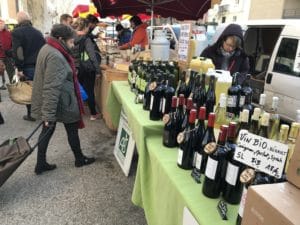 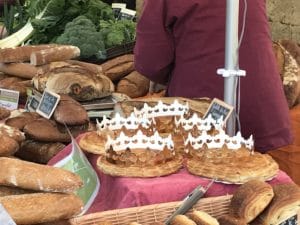 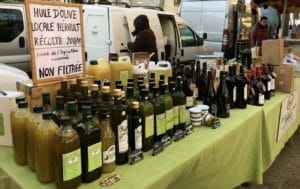 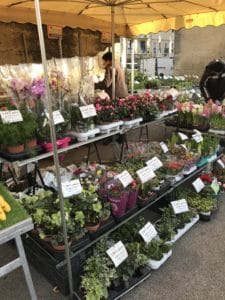 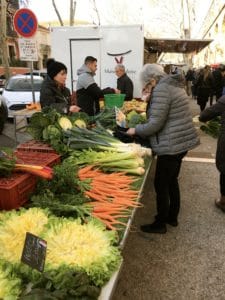 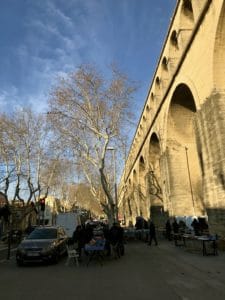 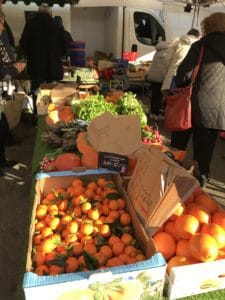 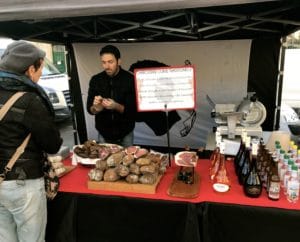 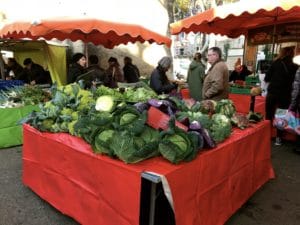 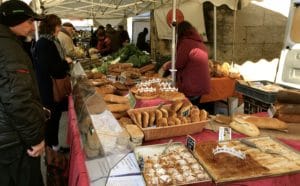 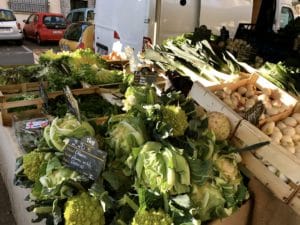 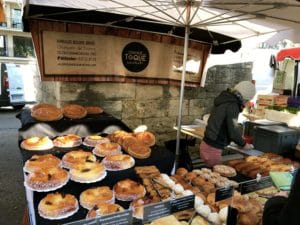 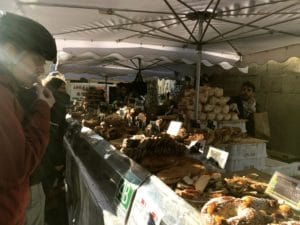 The main stands are still fruits and vegetables and many are the farmers themselves.  It is a wonderful feeling to buy directly from a food producer. You can even catch the odd old-time farmer singing out what they have for sale.  It totally changes the shopping experience and its timeless when you think about it.   Having direct contact with the supplier of your food instead of a middleman.   Keep in mind; I still go grocery shopping but now just for things for the pantry and dry goods.  Otherwise I buy most of what we consume here at here at Les Arceaux. 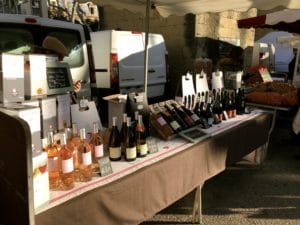 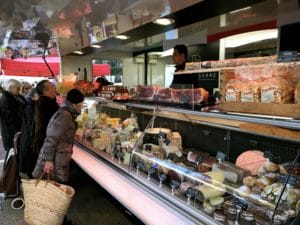 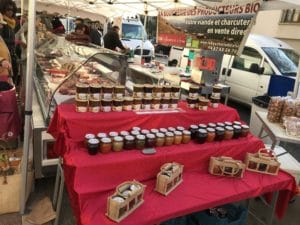 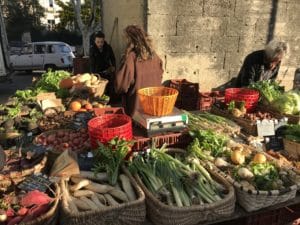 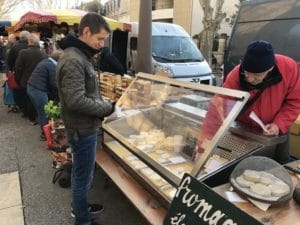 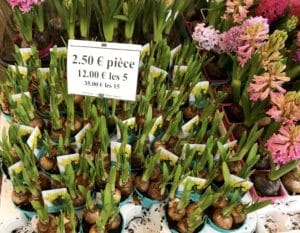 Basket weavers, small vineyards launching a new products, jewelry designers, craftspeople and even the ladies who knit and sell yarns are present.   Carpenters and chair caners selling reworked and new items every week.  There are even on occasion a band and/or street performers.  One of my favourites performers is the Poet who will write a poem for you.  He is called le Poète Public.  Give him a theme and for five euros he will compose something lovely for you!   Never the one to hold back (because, why not?), I had him compose two poems … one on me and the other for my native land, Canada.   Here they are, along with the poet himself, Mathieu Gabard: 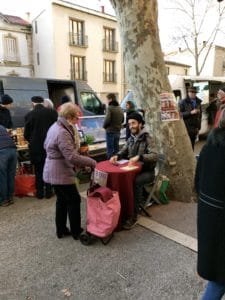 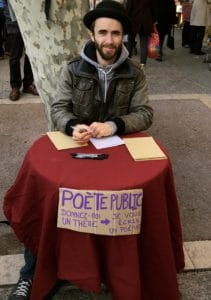 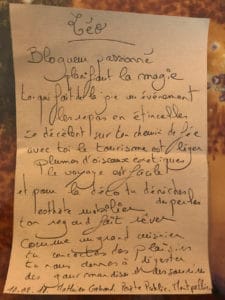 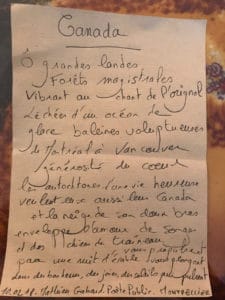 So go out and shop at your local farmers market.  I’ve got to go now, as I’m off to make pear jam with lots of ginger.

← Montpellier – Vivre ma France!Entertaining 1.0 – My Insider Tips to Make Your Next Party Perfect →