The Faculty of Medicine at the University of Montpellier was established in 1220 by Pope Honorius III, and is the one of world’s oldest university and medical school still in operation.  It has some famous alumni including Nostradamus, the great astrologer and prophesier, whose book Les Propheties has not been out of print since the 15th century.

In the 12th century, the Montpellier area had been home to several colleges, but no medical school.   At the time and throughout the Middle Ages, medical students did not go to a specific school to attend lectures, but to their masters’ homes to learn via an apprenticeship.  However, by the end of the 15th century Montpellier had become so renowned for this different style of teaching, the at home apprenticeship system was replaced with one main university building.  The medical faculty was originally located in La Panacée, what is now known as the art space, restaurant & student residence, just up the road on rue École de Pharmacie.   After the French Revolution, the school moved to new premises, the site of the former St. Benoît and St. Germain monasteries, which had been confiscated by the revolutionaries from the church.

When the school was created, the teachers were either Monks or Jewish doctors and so the earliest teaching was done in Hebrew. Eventually classes were taught in Latin, once it became the official language after the 13th century.

Having work at one of the most important medical schools in Canada, McGill University, I was excited to get a tour of the oldest faculty of medicine in Europe.  Basically a huge castle with adjacent gardens in the downtown of Montpellier.  I was lucky enough as well to book a tour and got to meet Marie-Helene Lecot, who gives passionate and knowledgeable tours of the buildings and the history of the faculty.  Marie-Helene is perfectly bilingual (English/French), a native Montpelliéraine and an arts graduate of the Sorbonne in Paris. It is clear while taking the tour with her that she remains zealous about her birth city while revealing the hidden secrets and little known facts of Montpellier. 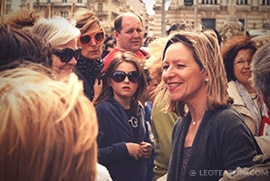 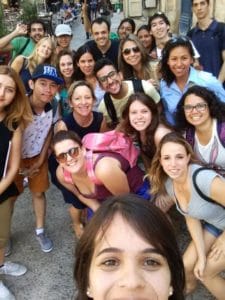 Located beside the St. Peter’s Cathedral, the university is located in a former 14th century monastery that previously had been dedicated to law and theology.  As we entered through the large wooden door, François Lapeyronie, the illustrious surgeon to King Louis XVI and Paul Joseph Barthez a former Chancellor of the University gaze down upon you. 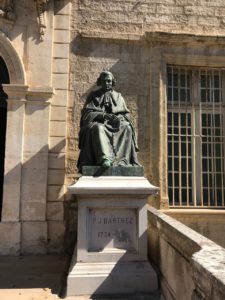 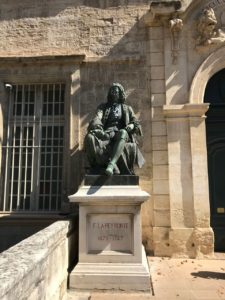 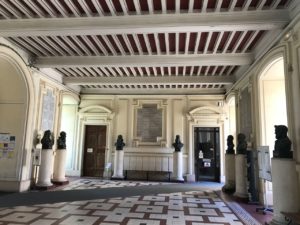 To your right is right is La Salle des Actes, otherwise known as the Thesis Defense Room.  At the time, it was necessary for the faculty to have an exceptional place for the final presentation of each student’s thesis.   There are beautiful painted frescos recalling it’s prestigious past, many oil paintings of the Professors are hung in this room too.   It is here that with pomp and ceremony, the student faces the last stage of their university studies.  To the jury of professors all dressed in red (long dresses and cloaks lined with ermine fur) is added a collection of portraits whose origin dates back to the 17th century.  Many of these faces were painted without knowing what the real person actually looked like.   But there is one special painting of someone who was not a doctor, but instead a barber surgeon.  Who is this man dressed in black in the middle of these red dresses?  He is Barthélémy Cabrol, one of the few barber surgeons in the 16th century who could read and write.  He eventually became Dean of the school. 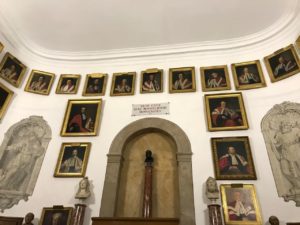 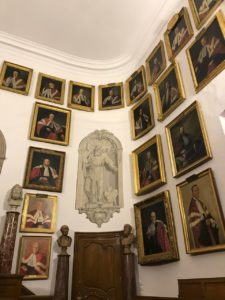 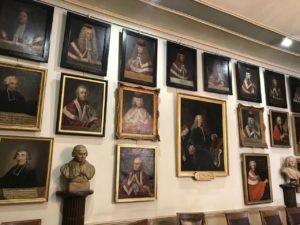 To the left is the cloakroom, where the young students would don their robes for class.  Today, it and the meeting room adjacent are home to beautiful oil-painting portraits of all of the professors of the Faculty reaching as far back as the 13th century. 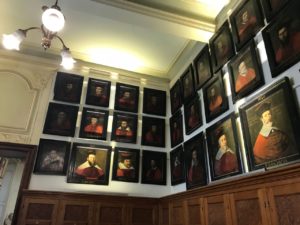 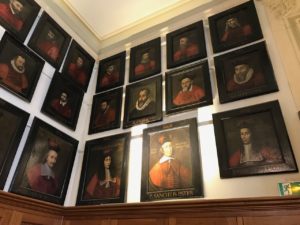 The Faculty also is home to many treasures including a library of 900 manuscripts, 300 incunabula; including 10,000 volumes printed before the 18th century.  Also included here are all of the theses produced by the Faculties of Montpellier and Paris since the 17th century.  Think about that, the number of people connected to this school is staggering. 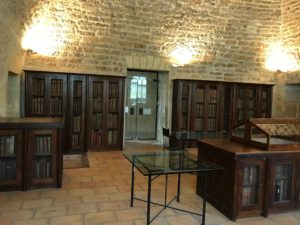 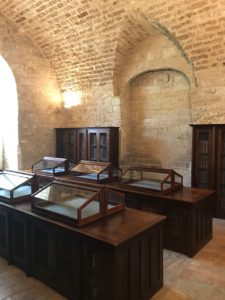 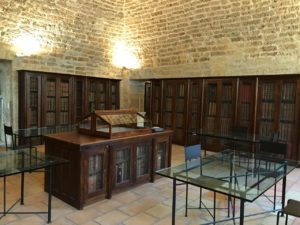 Also included in the faculty is the famed Anatomy Conservatory. Even if the labels are sometimes illegible, fragile windows and formaldehyde evaporated, this venerable place has retained its soul.   It is an interesting and humbling place that reminds you quickly just how mortal we all are.  But is also gives a sense of a place of teaching, of knowledge, for those who have taken the oaths to heal.   The museum was created during the Revolution in the 1790s at the same time as the School of Health, one of the three in France with Paris and Strasbourg being the other two. It has some surprising collections: anatomical parts, casts and wax models (cancerous and venereal lesions), various items relating to anthropology, embryology, malformations, pathology and skeletons, and surgical instruments and the famous statue “écorché” by Alphonse Lami.  The Conservatory of Anatomy, which has almost 5,600 anatomical parts and wax models used for teaching was listed as a historical monuments, in 2004.   They are exhibited in display cases or in the 60 m long by 15 m high gallery.  This area of the tour is not for the faint of heart, nor small children. 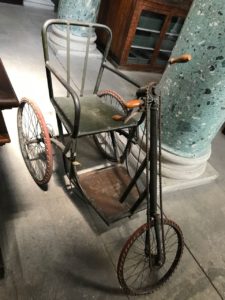 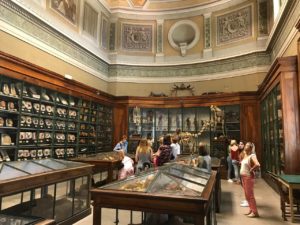 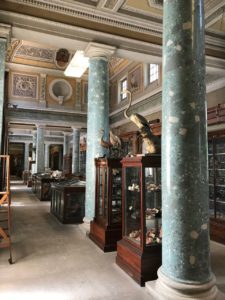 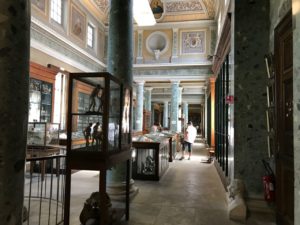 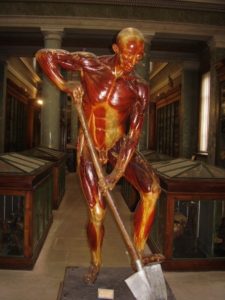 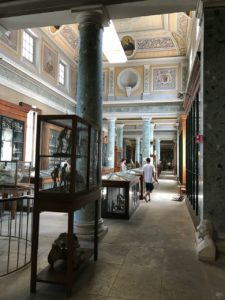 As for the alumni, the shining star is actually François Rabelais.  A truly over-accomplished person, he was a writer, a poet, a publisher, a humourist, a humanist, a mathematician, a lawyer, as well as a Franciscan monk and then later a Benedictine priest.  The bold Master François Rabelais became a doctor of medicine in 1537.  He has historically been regarded as a writer of fantasy, satire, the grotesque, bawdy jokes and songs.  Western literary critics consider him one of the great writers of world literature and among the creators of modern European writing.  There is even a university named after him.  His way of thinking embodies the spirit of Montpellier, which still evokes the local way of life.  Well hidden, a secret that few of Montpellier know … there is even a hidden message from Rabelais located across the street, in the faculties botanical garden Les Jardin des Plantes.  Can you find the words vivez joyeux hidden in the garden?

Nostradamus, the great astrologer and prophesier, had trouble with the members of the learned faculty and was kicked out of the school and therefore did not obtain his doctorate.  He had dared to make his own medicines from plants harvested at certain periods, according to the position of the stars, but this was considered a manual trade of Apothecaries and strictly banned by the Faculty, so he was forced to leave.  He did go on to write his poems predicting future events.  Even the Queen, Catherine de Medici was one of his ardent supporters.  Nostradamus’s supporters have retrospectively claimed that he predicted major world events, including the Great Fire of London, the French Revolution, the rises of Napoleon Bonaparte and Adolf Hitler, the atomic bombings of Hiroshima and Nagasaki, and even the September 11 attacks.

There is one more famous alumnus too, Pierre Magnol.  The Magnolia tree, with its sumptuous and delightfully scented white flowers owes its name to M. Magnol who was one of the pioneers of botany and the scientific classification of plants.

Montpellier has been known as a great medical school especially from the later Middle Ages onwards, and a complex medical community has existed in and around the university and city since then.   The Faculty has been famous for the quality of its teaching for centuries and that remains true to this day.

I hope you enjoyed my blog on the Faculty.  If you would to book tickets for a tour, you may do so by contacting the Montpellier Mediterranean Tourist Office.

To book Marie-Helene Lecot for any of the other tours that she gives of the city, you may reach her at Guide Lecot.