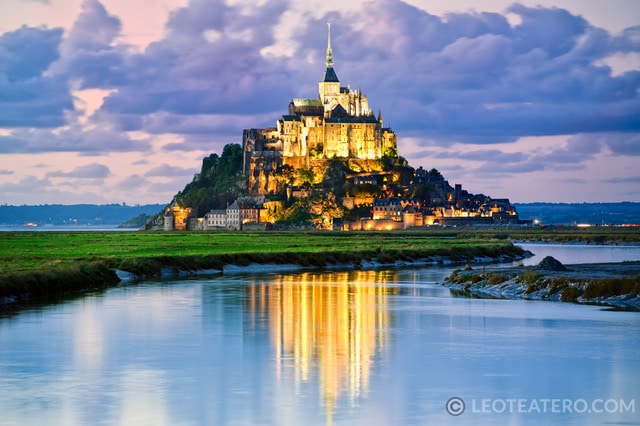 When I first saw Mont Saint Michel from 25 kilometers away, it did not seem real – just a mirage off in the distance.   It rises out of the misty fog in the bay like a fairy-tale castle.  It is almost seems fake, but as you get closer you realize that it is indeed real and huge.   One can see how this place can inspire many with wonder.   This fantasy island is located in a large bay off the Atlantic coast between the regions of Normandy and Brittany, in northern western France, and it’s mesmerizing.

The island can be reached by foot at low tide.  As we know tides are caused by the action of the sun and the moon. When they are in line with the earth, the attraction increases and creates spring tides; this is the period of highest tides.   Alternatively, if the sun and the moon form a right angle, the attraction is reduced and we are in neap tides, the period of lowest tidal movement.   These occurrences are heightened in Mont Saint-Michel bay, because with the islet is in the back of the bay, therefore the sea doesn’t reach the Mount during neap tides.   On the other hand during spring tides, the sea reaches the Mount but only after 4 hours and 30 minutes after the start of the rising tide, about every fortnight.   The highest tides in continental Europe take place at Mont Saint-Michel, up to 15 meters difference between low and high water.   During top of the spring tides, the sea goes out 15 kilometers from the coast and comes in again very quickly, resulting in many people misjudging the tides and losing their lives.

The rocky islet is about a kilometer in circumference, rises to a height of 80 meters and is linked today to the bay by a modern-day bridge.  The settlement is over thirteen hundred years old and houses a small village, 4 hotels, 4 museums, a number of restaurants and shops along with the over-the-top Abbey and Cathedral at its highest point.  There are 350 steps from the main street to the grand hall of the Abbey and I have climbed them all.  It is no small feat, but very worth the while.

The stunning location has long inspired awe and art for thousands of years.   The story of how the Mount turned into a great place of Christian pilgrimage is colourful for sure. According to legend, the Archangel Michael (who represents the fight between good and evil), appeared to Aubert, the bishop of the nearby hilltop town of Avranches, in 708, and compelled him to build a church atop the island.  For  hundred of years  men, women and children travelling the roads to the Mount, called the “paths to paradise”, hoping for the assurance of eternity, given by the Archangel of judgment, weighing of the souls.  To this day a statue of Michael rests at the highest point of the cathedral on the island overlooking all.

From the 10th century onwards, the dukes of Normandy, followed by French kings, supported the development of a major Benedictine abbey on the Mont-Saint-Michel and so the place grew.   Magnificent monastic buildings were added through medieval times and over the centuries, following fires, collapses, reconstructions, changes in use or restorations, the Abbey has been transformed.   The Abbey church, built on the summit of the Mount sits on an 80 meter long platform, consisting of four crypts built into the rock.   These crypts form the base of the foundation.  The abbey became a renowned centre of learning, attracting some of the greatest minds and manuscript illuminators in Europe who created and stored a large number of manuscripts. It was during this time that Mont-Saint-Michel was given the nickname “City of the Books”. Vast numbers of learners and pilgrims visited, despite warring cross-Channel royals and the danger of the tides.

The ramparts at the base of the island were built to keep English forces out. In the 14th century, the Hundred Years War made it necessary to protect the abbey behind a set of military constructions, enabling it to hold out against a siege lasting 30 years. Other fine buildings went up along the steep village street, now converted into museums, hotels, restaurants and boutiques for today’s tourists.

The abbey contains twenty grand rooms, which rests on top of the Mount.   It offers visitors a 360° view over the bay and is one of the main attractions. It has a huge walking wheel that was used to lift goods 80 meters from the ground up to the Abbey.

During the time of the French revolution there were barely any monks left at the Abbey.  It was therefore closed and converted into a prison, initially to hold opponents of the republican regime.   Mont Saint Michel was then known as the Bastille on the sea and the walking wheel (see photo below) was then used as a form of punishment for the prisoners.   They would spend 8 hours a day walking on the wheel to atone for their crimes.   Many high-profile political prisoners followed, but by 1836, influential figures—including Victor Hugo—launched a campaign to restore what was seen as a national architectural treasure. He was famously quoted saying “Mont Saint Michel is to France what the Great Pyramid is to Egypt.  The prison was finally closed in 1863, and the mount declared a historic monument in 1874.   Mont Saint-Michel and its bay were added to the UNESCO list of World Heritage Sites in 1979, and it was listed with criteria such as cultural, historical, and architectural significance, as well as human-created and natural beauty.

In 2014, a permanent light bridge was officially opened, which allows the waters to flow freely around the island and improves the efficiency of the now operational dam.  It still occasionally gets taken over by the tide, but only once or twice a year.

Today, there is an official population of 50 people on the island, who play host to the 3 million tourists who pass through the gates every year.  However, it is estimated that only 25 people sleep every night on the Mount (monks and nuns included), except in hotels.

There are private tours and audio guides that you can rent of the Abbey grounds. You can even host an event there, with full catering services for your guests.  Imagine having a wedding here.  The views and photos would be spectacular.    One of my favourite things about Mont Saint-Michel is that it is illuminated from nightfall to midnight all year long and it is one of the most spectacular sights I have ever seen.   It’s mesmerizing to see, day or night and a must do when in France!