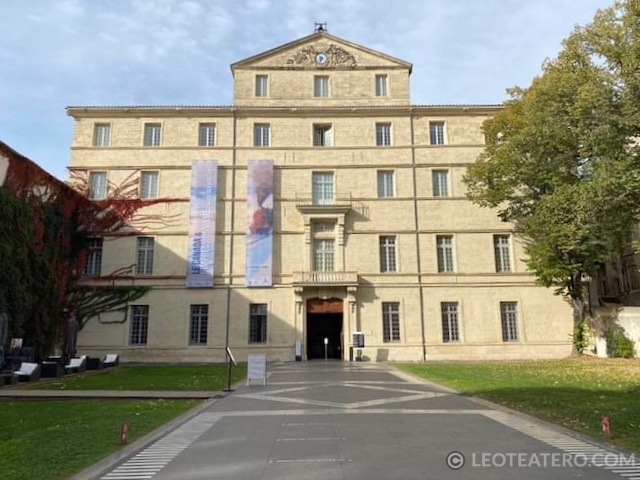 The Musée Fabre is a picturesque museum located in the southern city of Montpellier, and is having an exposition on Canadian art, titled “Canada and Impressionism: New Horizons”. I will talk specifically about the show and include photos of the art later, but first let’s talk about the museum itself. It is magnificent structure and considered a work of art on it’s own, with its combination classical and contemporary architecture.  It is also the showcase of one of the most important fine arts collections in France with over 800 works, 900 engravings and 3,500 drawings in its 9,200 m² exhibit area.   Italian, Spanish, Flemish, Dutch and French collections, painters of the great European schools of the 16th to the 18th centuries (Zurbaran, Reynolds, Tenier, Veronese) and of the French schools (Greuze, Ingres, Delacroix, Courbet, Bazille), ceramics and sculptures, contemporary paintings, stimulating works of modern art, by such as Rubens, David, Monet, and even Andy Warhol.

The museum is separated into 6 sections/buildings, beginning with the original structure of the Hôtel de Massilian, the Ancienne Bibliothèque (Old Library), Hôtel de Cabrieres Sabatier D’Espeyran, the Collège des Jésuits, the Soulages Wing and the Restaurant Insensé.   You enter by the inner court of the former Jesuit college located just off of L’Esplanade Charles-de-Gaulle, north of city centre square, Place de la Comedie.

The history of the museum is relatively new for France.  In 1802, the town of Montpellier was given thirty paintings, which formed the basis of a modest municipal museum under the Napoleon Empire, moving between various temporary buildings.  In 1825, the town council accepted a large donation of works from Francois-Xavier Fabre and the museum was installed in the refurbished hôtel particulier, Hôtel de Massillian, and officially opened in 1828.

But the question remains, who was François-Xavier Fabre?  He was born on the April 1st in 1766, in Montpellier (no joke).   Fabre was a pupil of Jacques-Louis David, and made his name by winning the Prix de Rome in 1787.  Winners were awarded a bursary that allowed them to stay in Rome for three to five years at the expense of the state (Louis XIV).  He was quite lucky, because during the French Revolution, Fabre went to live in Florence, becoming a member of the Florentine Academy, where he also taught painting.  The city’s Italian aristocrats and tourists were drawn to his elegance, realism, and precision of his portraits.  This popularity earned Fabre a place in the Florentine Academy.  He became an art teacher, art collector, and art dealer in Florence.  Fabre’s works include The Dying Saint Sebastian (1789), The Judgment of Paris (1808), and The Death of Abel. Here are some of them:

The friends he made in Italy included the dramatist, Vittorio Alfieri, whose widow, Princess Louise of Stolberg-Gedern, Countess of Albany, married Fabre, after Alfieri’s death.  It seems doubtful that their relationship was a romantic one.  Louise continued to live in Florence until 1809, when she was summoned to Paris by Napoleon during France’s war with Britain.  He asked if she had ever given birth to Charles Edward’s child, hoping to find a legal heir who could then be used to cause insurrection in Britain.  When she replied “no”, the meeting was abruptly terminated.  A year later, she was allowed to return to Florence.

On Louise’s death in 1824, Fabre inherited her vast fortune, which he used to found an art school in his hometown. On his own death, he bequeathed his own art collection to the town, forming the basis of the Musée Fabre. Fabre’s generosity led others to follow his example, notably Antoine Valedau who donated his collection of Dutch and Flemish masters to the city.  On the death of Fabre in 1837, a legacy of more than a hundred pictures and drawings completed the collection.

In 1864, Jules Bonnet-Mel, an art collector from Pézenas, bequeathed 400 drawings and 28 paintings.  In 1868, Alfred Bruyas gave the works from his private gallery to the city.  He is credited with having moved the museum collection into the modern era.  In 1870, Jules Canonge, from Nîmes, gave a collection of more than 350 drawings.   A legacy of Bruyas of more than 200 works completed his gift in 1877.

In 1968, Mme Pierre Sabatier d’Espeyran in agreement with the will of her husband, a diplomat and abundant bibliophile, gave to the city their hôtel particulier Hôtel de Lunas along with its contents. As you can see, the house is an amazing historical piece of life for the rich in France during the 19th century.

Around 2001, the Library moved out of the complex, freeing a sizeable area and offering the chance to carry out a major modernization and enhancement of the building. This took four years and included a whole new wing,  the Soulages Wing.   The building re-opened in February 2007, having undergone a € 61.2-million renovation.

The latest exhibition at the Musée Fabre and the National Gallery of Canada is called Le Canada et L’impressionnisme: Nouveaux Horizons.  It shows how Canadian painters discovered the Impressionist revolution in France in the late 19th century and how they reacted to it through their own distinct style and subjects.  Many Canadian painters spent time in France studying to improve upon their craft. Upon their return home, the inspiration they had drawn from this new painting style proved key to the emergence of modern Canadian paintings.  The exhibition of 100 paintings and 35 major Canadian artists including the first avant-garde Group of Seven is delightful to experience, especially as a Canadian living in France. You can see works by Emily Carr, Prudence Heward, Helen McNicoll, Henrietta Mabel May, Sophie Pemberton and Mary Bell Eastlake. Other artists in the show include Tom Thompson, James W. Morrice, Maurice Cullen, Clarence Gagnon and Lawren Harris, many of whom travelled widely in Canada and abroad and depicted a range of landscapes. This is the second stop on the international tour for this exhibition, the first was in Ottawa at the National Gallery of Canada, and the next will be Fondation de l’Hermitage, Lausanne, Switzerland from January 24 to March 13, 2020.

I recently visited the museum with a great Canadian friend, Maya. We had a great time touring the space, seeing the Canadian exhibit and checking out everything else the museum has to offer. And we wore our masks faithfully.

Like many other museums in France, you can visit Musée Fabre for free the first Sunday of every month.  Children under 18 who live in the city or any of the municipalities that comprise the Montpellier Méditerranée Métropole, as well as people under 26 who present a student’s credential, whether they live in the area or not, can also enter for free.   While the museum is currently closed due to the confinement of the country from COVID, it is normally open from Tuesday to Sunday, 10am to 6pm.  Hôtel de Cabrières-Sabatier d’Espeyran, which has a separate entrance is also open the same hours and days.  The museum is closed on January 1st, May 1st, November 1st, November 11th and December 25th.

So when you can, spend a day at a local museum.   They teach us history, culture and perseverance.  They also inspire us and make us smarter by gaining new knowledge and opening our minds to things we have not considered.   If you liked this blog, check out my other blogs regarding art and how to buy it. Be safe, and wear a mask too.

← Do Tank, A Place for Creation and InspirationBaguettes, Boulangeries & the French Revolution →
Scroll To Top