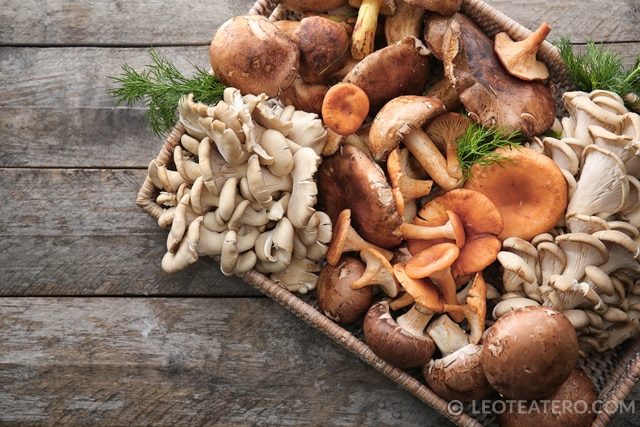 Wild mushrooms, otherwise known in French as champignon sauvages have been collected for well over 10,000 years in Europe.   One of many splendid things about France is the abundance of mushrooms in the wild.  Autumn is the best season to pick mushrooms but you can find various types of mushrooms any time between April and December. And so earlier this month, we went foraging with our guncles (gay uncles), in the forest around Vesoul in Franche-Comté.  Jacques and Didier are definitive mushroom experts and can tell you exactly what kind of mushroom without the aid of a book. We were all together visiting family for Toussaint (All Saints Day) and had a wonderful adventure foraging through the forest and bushes for the elusive wild mushroom.

France is beautiful in the fall, with the leaves changing colour and dropping to the forest floor, helping to continue the cycle of growth in the forest.  And you will find hunters searching through bushes and by fallen trees making mushroom hunting more of an obsession than a hobby with some locals hoarding their secret best spots.  Mushrooms are fungi, which are so distinct in nature they are categorized as their own kingdom – one that is neither plant nor animal.   Mushrooms are nutritious, high in vitamin D and healthy to eat.  They are also fat-free, low-calorie, nutrient-dense, low in sodium and contain natural antioxidants.

Mushrooms are also farmed in France, with the first Parisian mushroom farm formed in 1707, beneath the city in the famous Catacombs where they buried their dead.  The story goes that the horses would relieve themselves on the streets and the manure would fall into the catacombs, spores from the nearby forest blew into them and started growing on the streets.  This specific mushroom was called les champignon de Paris, but we know it as the button mushroom, or its Latin name Agaricus bisporus, with its distinctive head and shape.  Almost 200 years later in 1893 the Pasteur Institute in Paris added a sterilization step to the process of growing them to improve quality.   These button mushrooms are no longer grown in the Catacombs, as it is now a Historical Monument. But indeed they are grown and harvested all year long in a three week cycle of production, sometimes in underground farms, and they remain the most popular mushrooms consumed in France.

Many French recipes include mushrooms and of course everyone knows the famous Vol au vent or Bouchée à la reine.  Aside from being in countless recipes they are also served in two typical French dishes: a Fricassée or a velouté. Other dishes, not entirely French although popular here, can be stuffed mushroom caps, mushroom risotto or mushroom lasagna.

The are many rules to harvesting mushrooms and the most important is Article 547 of the Code Civil, which says that mushrooms belong to the owner of the land where they grow.  Each commune has the right to decide whether mushroom picking is allowed.  They can say what amounts can be picked, there event could be a fee for collection mushrooms or they can even forbid mushroom picking in the surrounding forests.  A law passed thirty years ago gives regional Préfet (the head of services) the right to take restrictive measures in order to preserve local fauna and to limit mushroom picking.  Each Préfecture can regulate the quantity of mushrooms allowed per person (usually 2kg per day), the days when mushroom picking is permitted and in some areas, there might be additional specific restrictions applying to certain species of mushrooms.  Violating these rules can incur fines from 750€ to 45,000€ and even time in prison, so contact the local Mairie (Mayor’s office) or the local prefecture, in the commune where you wish to go picking.

There are a number of common rules that should be followed when picking mushrooms:

Happily they can still be found outside and all over France.  The first thing you need to do is plan your trip to figure out where to find them.  You can do some research by speaking with friends and neighbours.  Ask to go with them when they go hunting.  But do be mindful, as I mentioned before some French people guard their secret mushrooms spots very well.   There are websites and blogs dedicated to mushroom picking, which explain the ideal environments for mushrooms.  But, I am going to give you some helpful hints to find the most popular ones found in France.

Mushrooms you can find and safely eat in France

The first mushroom we’ll talk about is called boletus, otherwise known as Cèpes in France or Porcini in other parts of the world.  Some are diuretic (it increases the flow of urine) and some are bitter, but they will never kill you. They are highly distinguishable because they have a sort of spongy underneath.   Easily found in the autumn, this mushroom cap will look rather like a lightly greased bun and the colour can range from yellow brown to a reddish brown/bronze. The caps can grow as large as 30 cm (12 inch) when mature and weigh up to 1kg (2lb) with a stem of about the same weight. The stem shows a very faint net or web pattern and is very solid and white. If in doubt, cut it. The flesh should remain white.  They can be found in Oak and Chestnut forests.   Cèpe de Bordeaux or Porcini Mushroom has a similar look and can be found near Bordeaux in its vast Pine tree forests.

Chanterelle, Pfifferling or Girolle mushrooms are golden, yellow and have a trumpet-like head, with a depression in the center of its cap, the chanterelle is one of the most popular wild mushrooms. Chanterelles are usually scavenged in the wild, as they are very difficult to grow.  They are fleshy and firm; sometimes have a fruit like scent and sometimes even a peppery taste.  They never grow on wood, and instead can be found in grassy areas or coniferous Forests.  Their season starts at the end of June and goes until the end of the summer, and they require a moist habitat, so rainy summers are the perfect timing.  There is also the Trompette-des-morts aka the Black Chanterelle, which are also quite popular.

La morille conique, Morels or morchella, is easy to spot with its conical, spongy or honeycomb look.  These never grow bigger than 10cm (4inches) and can be found usually in areas where there is ash from a fire.  It has a nutty and woodsy taste and must be cooked, as they are toxic in their raw state.  They dry beautifully and are prized in French cuisine. They can be found from mid April to mid May.

Pied de Mouton or Hedgehog Mushrooms are dry and yellow coloured and can sometime look like little puddles of cream.  They have irregular caps and grow in plentiful arcs around pine, beech, birch and oak trees from September to December.  These do not dry that well and are best suited consumed immediately or frozen.

Truffe Noire, Black Truffle or Black Diamond is the most prized mushroom in France.  Growing mainly in the Dordogne or Provence regions these underground mushrooms are the hardest to find.   They grow in oak and hazelnut tree root systems and are sometimes found using dogs or pigs, which use their superb sense of smell to find them.  A truffle farmer or harvester accompanies the animal, and collects the fungi, making sure that none get eaten along the way.   There is also a winter white version of this truffle, which has a distinctive peppery taste.  Truffles are used to infuse their distinctive flavour in everything from paté, to cured ham and pasta sauces.

Fête de la Truffe, are annual festivals dedicated to truffles during the truffle season from January to March.  These festivals include local and regional produce stands, culinary workshops, truffle and champagne tapas bar, and more.   You may even find digging and hunting competitions with dogs and pigs too.   Contact your local Prefecture or Mairie to find out.

There is even a museum dedicated to mushrooms here in France, located in Saumur, near Tours in the centre of France.  It is an underground labyrinth of caves called troglodytes, with rooms dedicated to mushroom production.  It gives a clearer picture on how mushrooms are grown for consumption and explains the mycelium, which is the root structure of mushrooms and how they participate in the growth of trees.  Here you can buy the famous Champignons de Paris (Button), Pleurotes (Oyster), Shii-takés (Shiitake) and other interesting varieties.

It is very important to remember that there are 5 poisonous mushrooms found native in France that can kill you.  If you are going to earn the ones to eat, you must also remember the ones you cannot eat.   Here is their Latin, French and English names, with their photos below.

There are approximately 30 deaths per year in France caused by eating poisonous mushrooms, the majority from eating the Death Cap.   You also need to note that there are many other non-edible mushrooms in France which can produce upset stomachs and intestinal discomfort (nausea, diarrhea) for a limited period of time or more serious ailments such as convulsions, tachycardia or kidney infection.   And a good thing to note is that Pharmacists in France are trained to identify certain fungi.   So you can bring your mushrooms to the local Pharmacy and have them verify whether they are edible. In case of poisoning, call or go to the Emergency Service (Urgences).  If possible, take some of the mushrooms or the remains of the dish eaten. Never try to self-cure, do not take any drugs, and do not attempt to throw up.   There are also a National Anti-Poison Centre and may be a bureau close to you.    You can find the list and telephone numbers here.

Like all things that grow in the wild, the mushrooms are at the mercy of the elements, but the ideal time to pick them is after it has rained and in the autumn season (except for chanterelles, morels and truffles).   To preserve your mushrooms do not wash them, rather wipe them with a damp cloth or paper towel.  You can alternatively use a brush.  If they are intensely dirty, you can run them under water, but never soak them in water.  For the cèpes we found, we removed (by hand) the green underside that was on some of them (note the large one in the photo), then sliced the heads into half inch moons. Placed them on the racks of our guncles portable dehydrator and 10 hours later perfectly dried cèpes. If you are a serious mushroom hunter you should already have a dehydrator as they remove the moisture from the mushrooms and other edibles within 12 hours and are ready to be bagged and stored for future use.

After our wonderful two-day hunt, we ended up with just less than 2 kg of mushrooms ready for cooking this winter.  I see mushroom lasagna in the not so distant future …