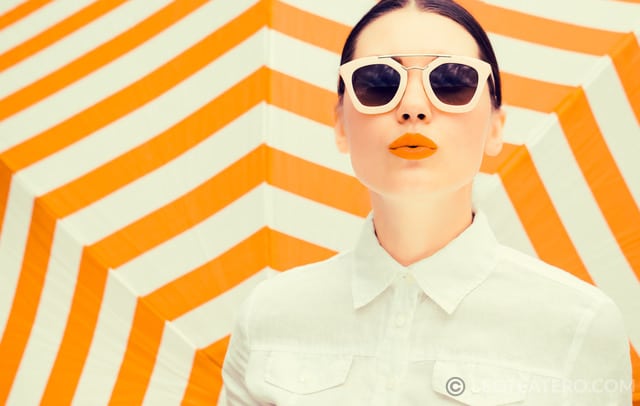 Love it or hate, this flamboyant colour can lift your spirits and make you instantly feel happy and alive, something many of us need right now in the time of the Covid-19 virus.   Orange is definitively powerful, which is why people have such clear reactions to it. I personally adore the colour orange. I love to wear it, buy lots of flowers that are orange and even my favourite cushy pillow is orange. Orange is a secondary colour but it is also the colour of loving life and vitality, no wonder it is the most popular colour of extroverts.  That is definitely me. Orange symbolizes health, light, happiness and can instantly conjure feelings of enthusiasm, creativity and success for some. And its perfect compliment is blue, another of my favourite colours.

In the realm of spirituality, Orange in Christianity is the symbol of glory and fruits of the earth and was also known as the ray of wisdom.  Orange is also the colour commonly used for robes worn by Buddhist monks, and represents a commitment to perfection or illumination.   Orange is the also colour of the Sacral chakra, which is located beneath the navel, close to the groin and is linked to the sexual organs and reproductive system. Opening this chakra will free fertility and inherent creativity. In these stressful times, aligning your chakras might be a great idea. Here’s a beginners blog on it.

A long time ago, in the Elizabethan Era in England, only nobility could wear orange as it was considered the colour of courage.  I guess peasants weren’t allowed to show courage back then. Orange is also a Royal colour for some, as it the Dutch Monarchy Family’s colour. They are direct descendants of William of Orange, and so the colour became the symbol of the Netherlands as well.  In terms of countries in the world, the colour orange can be found on the flags of Bhutan, Niger, India, Ireland, Armenia and Sri Lanka.  Starting in 2008, every 25th day of the month is declared as “Orange Day” by the UN’s campaign called UNiTE to End Violence against Women. The day is to raise awareness and act to stop violence against women. In terms of fundraising and awareness campaigns, orange ribbons are worn to support self-harm, ADHD, Multiple Sclerosis and Animal Cruelty. The colour orange can certainly help attract attention.

It is also the easiest colour to see in dim light or even darkness as it can used to draw attention in with such things as traffic signs and warning pylons.  It stands out easily and can be seen from afar, hence the reasons that it is used on highways and construction sites.  Its the colour that screams look at me and that’s why I love it.

Professional sports teams use the colour to attract attention like the American football teams Chicago Bears, Cincinnati Bengals, and baseball teams, the San Francisco Giants and Baltimore Orioles.  It is also the colour of the African Cup of Nations for soccer.

Given its self-named fruit, it also provides a person with a juicy sweetness or a glass filled with sunshine and vitamin C.  Another of my favourite things is turmeric, first used as a dye, then later a medicine and spice in South Asian cuisine.  The colour orange can be found in many foods, apricots, mangoes, cantaloupes, sweet potatoes and carrots. Did you know that the carrot originally was white? The orange carrot was created after crossing the white carrot with a purple carrot. Orange vegetables contain health promoting nutrients like potassium, vitamin C, vitamin B6, fiber, lycopene and flavonoids. Brightly coloured foods contain phytonutrients (or ‘plant nutrients’) which can help prevent disease. We all know eating orange fruits and vegetables is good for you.

And, of course one cannot talk about orange without mentioning “Orange is the New Black”, the critically acclaimed Netflix series about a women’s prison, written by Piper Kerman. The phrase “_______ is the new black” comes from the phrase “Pink is the New Black” from the movie Funny Face starring Audrey Hepburn, Kay Thompson and Fred Astaire. Funny Face received four Oscars and is one of my most favourite movies ever!! You really should see it and of course one of the reasons I love the film is that it takes place in my favourite city, Paris.

It is also one of the warm colours and is also represented in the colors of fire, fall leaves, sunsets and sunrises.   In its subdued forms it can be associated with the earth and with autumn.  Because of its association with the changing seasons, orange can represent change and movement in general.  Orange is also strongly associated with creativity, energy passion and positivity. In North America, a harvest table is not complete without a touch of orange!

In designs, orange commands attention without being as overpowering as red. It’s often considered more friendly and inviting, and less in-your-face.  Paired with navy blue it is a show stopper for any décor or fashion statement. Vincent van Gogh once said “There is no blue without yellow and without orange”.

From fashion to energy – the rind and seeds of Sicily’s most famous citrus fruit, the orange, are being used in a range of greener, healthier business initiatives too.  Oranges are now being recycled to produced energy, make fat-free flour and even fibers spun into yarn for fabric, as shown in Salvatore Ferragamo 2017 collection made with orange fibers.

Orange is widely used for my favourite holiday, Hallowe’en and can be seen everywhere in the decorations and pumpkin patches.

In these current days where we are all in quarantine, I suggest you use orange to help brighten your days.  By focusing on the colour orange it will help give you more strength, improve your energy and make you feel better.  Think of placing splashes of orange in your home, like flowers, pillows, furniture and art. Wear orange scarves, belts or gloves. Bring more orange into your life.

Oh, and for the record, I’m wearing it right now.  Orange you glad I told you?

← French CuisineWhat to do when Quarantined at Home →