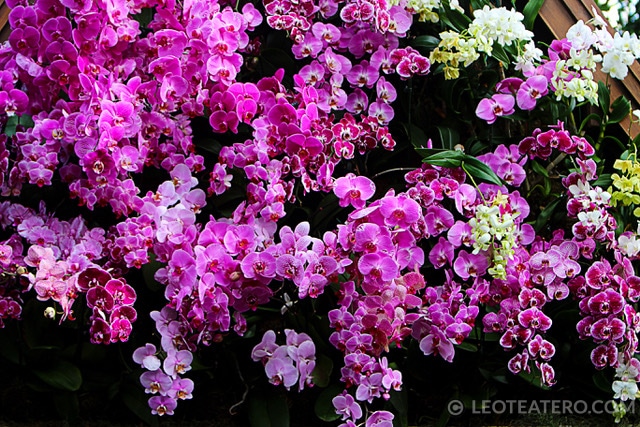 As you all know, I am a flower guy. I love filling my home with plants and flowers and one of my favourites are orchids, a luxury item since ancient times and now (thankfully) readily accessible to many.  There are over 28,000 different kinds of orchids in the world and they can be found on every continent, except Antarctica.   It is considered to be mother nature’s masterpiece in the flower world. The Chinese have been cultivating orchids for over 4000 years, while Western society has really only known them for about 250 years.  They are a very versatile plant and I often use orchids often when doing flowers for my events.  They make the most amazing centerpieces, corsages, boutonnieres, and are great for bridal bouquets, as they are a hearty flower that can last days in a bouquet.  Here in France, orchids costs around 10 to 15€ and therefore are an affordable and longer lasting alternative to cut flowers.

I’ve readied large banquet tables set with little vases of 4 roses each and tall vases with submerged cymbidium orchids for weddings and at more intimate, private dinners I’ve installed individual orchids in low martini glasses, both adding a wonderful exotic dimension to my tables.   At one dinner party for 12 people, seated at a square table, I designed 16 small vases of orchids, all floating in the same direction.  It was a pool of floating orchids and it cost almost nothing and present a stunning place to dine around.  They are also wonderful flowers to many people, as they do not have a scent.  Only a few orchids actually have a scent as the flower’s beauty is what the plant uses to attract bees for pollination.  There is some differences between certain orchids, those that look heavy and feel waxy, will live longer than those that are more delicate looking. Although generally orchids flowers last longer than any other flower when cut, as they are usually place in tiny little water tubes which can keep them for up to two weeks.

Interesting enough word orchid comes from the Greek word orchis, meaning testicle.   You heard right.   Their tuberous roots who thought to look like testicles.  Another reason why the orchid is linked to fertility as well as love, beauty, fertility refinement, thoughtfulness and charm.

I will show you later in the blog how to take care of a very common orchid called the Moth Orchid otherwise known as Phalaenopsis (fail-an-nop-sis) Orchids.   It was named so because the explorer who discovered them thought they were simply moths on a branch.  These types of orchids are a special kind of plants called epiphytes, meaning that they grow on top of a tree, not in the ground in soil.  Their roots need air and moisture to grow, so we grow them in a plastic retention pot surrounded by bark and other substances that hold moisture.

Wild orchids are present in all regions of France, but sadly livestock and land cultivation has been extremely destructive and therefore many orchids are vulnerable and hard to find.  In the south of France there are over 50 native species of orchids.  You can still find some of these local orchids, which grow in the soil, unlike the popular florist orchid, Phalaenopsis.  The Bee Orchid, the Green Winged Orchid, Early Spider Orchid, the False Spider Orchid and the Sawfly Orchid, can find some of them in places like riverbanks, ditches and even in cultivated fields, as the cultivation sometimes helps in their propagation.  One of the upsides to having everyone be in quarantine has been that some species of orchids have been rediscovered here in France, in the Toulouse area and also south of Alsace region.

You can go hiking and look for orchids in the Ariege region, near the Pyrenees during the months of May and June when they are at their peak.  It definitely is a great area for them.  I also found this great flora and fauna blog called Planete Passion.  This site is one of my go-to for anything in nature in France.  I cannot recommend them enough.  They have an orchid sections that exists on their site which is quite interesting and helpful at identifying local orchids. In the Western World, there are many groups and organizations around the world dedicated to the care of orchids.  Some of these including the American Orchid Society, The Canadian Orchid Congress, The Orchid Society of Great Britain and here in France la Société Française d’Orchidophilie.

Our guncles who live just outside Paris are always in the fields looking for plants and herbs. They have found many orchids near their home, along with a few special ones when we were on holiday in Norway.

How to Bloom an Orchid

As I mentioned earlier, the best orchid for the home (and gift giving) is the Phalaenopsis orchid.   They are hearty and long-lasting orchids.  You do need to set up a weekly for taking caring for them.  Orchids like temperatures between 66°F/19°C to 77°F/25°C with humidity above 50%.  Place them where it will receive bright but indirect sunlight.  Some light air movement would be beneficial.  I have mine in a loft close to a skylight window, but not directly underneath it and they thrive well in this environment.  If it is in a vertical window it should be south or east facing.

Water weekly by giving the plant a bath in water for 3 to 4 hours depending on the size.   Simply leave the plant in its plastic pot inside the large pot and submerge the roots in water.  Let rest on the counter for the allotted time, then remove the orchid from the main pot, dump the water out and let the orchid rest in the smaller pot (or encasing) until it is no longer dripping with water.  You want to retain some water in the wood chips, but not on the roots.  This is especially important during the active growing months from late winter through early fall.

In mid fall, try exposing it to evening temperatures around 55°F/13°C for several weeks to coax it to begin the bloom cycle.  Also, at the same time, feed it one teaspoon of Epsom salt mixed in a quart of lukewarm water instead of fertilizer.   Alternatively, you can grind banana rinds and make a tea to add to the orchids bath.   Even though many people swear by this watering trick, most experts agree that you should NOT use ice cubes to water the soil as they are too cold for these tropical plants and may develop root rot, and inhibit blooms.

Once all of the blooms have fallen off and the stem turns brown, remove the flower stem by cutting it off about an inch from the bottom, this will allow the orchid to devote all of its energies towards growing stronger for next year’s blooms.    To do this, look where the lowest flower had been then following the stem downward until you see a node (bump), go back up an inch or two then cut the top off.  If all goes well, in one to two months a new stem will emerge from the node.  Be patient as it can take from three to six months for that new stem to produce flowers.   However, if the top of the stem does not begin to die-off, you may be very lucky and have a phalaenopsis orchid plant that can produce flowers from the same stem over several years.  Phalaenopsis orchids normally produce blooms once a year but a few can produce blooms several times a year under ideal growing conditions.

Giving an orchid has been a signature gift of mine, and a tradition that I have carried on from a great mentor of mine.  She always reminded me that the orchid is truly the best gift for the host and if you can, it should be sent in advance of the dinner, with a note.  It has a lasting affect, is affordable and pairs well with most every style of room or person.  The next time you are at the flower shop and thinking about what to give, why not give an orchid?

PS – If you liked this blog, check out My House of Flowers.