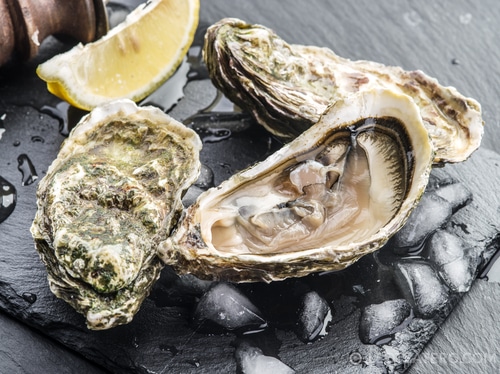 “The world is my oyster”, has been one of my favourite mantras for my entire life. Funny though, I hated the idea of eating them and now I cannot eat them enough. I love oysters and mussels.   One only need read any of my French restaurant reviews to see how many times I order oysters.  To me, they are the perfect start and indicator of a delicious French meal.  Of course, here in France, they are eaten all year long, especially at Holiday meals, like Christmas and Easter.  They are always on the menu at any high-end brasserie as well.  Paired with champagne they are a gastronomical delight and a foodie must.   Mussels in France can be found everywhere, especially close to the sea.  From Brittany restaurants serving fresh mussels of the day to canapés and hors d’oeuvres in the chicest restaurants, they are everywhere.  I’ve even got my own special favourite place to eat them near my home on a dock overlooking the Mediterranean Sea, but more on that later.

But let’s first talk about the history and how shellfish are farmed in France.  The first recorded organized mussel farming in Europe was mussel production, back in 1235, here along the Mediterranean.  Since then, mussel farming developed throughout the area and then the entire European coastal area.  Starting with the Atlantic coast with the blue mussel, followed by the Spanish Atlantic coast and the Mediterranean with the Mediterranean mussel, which is farmed as far as the Black Sea.  The different cultivating techniques were perfected at the end of the 19th century, when mussel farming was developed providing a much-needed source of low-cost protein.  Mussels then became a very popular dish in Western Europe because of its affordability.

The Romans started oyster farming as far back as the 1st century here.  It blossomed and then died out due to the wars.   Shellfish farming was revived on the Mediterranean coast at Sète, south of Montpellier around 1875.  As the Mediterranean Sea does not have tides, it was necessary to use a special technique: suspended culture, carried out using tables made of rails supporting ties and crossed poles.  With oysters cemented to the poles.

Oysters are the best thing for an aquatic environment.  Every day, one oyster filters over 50 gallons of water. An oyster draws water in over its gills using cilia, or tiny hairs (like Baleen whales).  Plankton and particles in the water are trapped in saliva in the gill, and then brought to the oyster’s mouth.  The oyster removes excess sediment, nutrients, and algae from the water.  That keeps the water in good shape for other marine life.

Oysters from the Thau basin

Half of France’s oyster production comes from the Etang de Thau (Thau lagoon) and its native oyster, the Bouzigues (named for the charming floral village in the area), just south of Montpellier.  It is the most popular kind of oyster and is cultivated in the entire curve of the western Mediterranean Sea from Mèze and Marseillan.   Bouzigues have marbled, jagged shells and salt-water freshness with nutty flavor.  Normally eaten raw, they can also be served au gratin, with garlic, parsley and butter, or in a white wine and shallot sauce.

As I mentioned earlier they are suspended on tables made of rails supporting ties and crossed poles.  With oysters cemented to the poles.  There is a great and informative museum in the area, called Le Musée de l’Etang de Thau, which explains the history and techniques of oyster and mussel farming in the area.  It is a great place to visit, especially with the kids to see and understand the whole production of these two delicacies.

Mussels from the Thau basin

Almost 3000 tonnes of Mediterranean mussels are produced each year in the Thau basin.  They are of a particular variety, called Mytilus Galloprovincialis. They are grown from spat (like a cage) harvested in the sea, and these seeds are then rope-grown Marseille style, inside double cotton netting submerged in deep water.  It takes around 12 months for the mussels to reach an acceptable size. They’re larger and plumper than deep-sea mussels, and have a beautiful bright colour and a very strong salty flavour.

They can be eaten raw or cooked, as Moules Marinières or barbecued over vine twigs, according to taste, and the largest ones are of course stuffed using a traditional Sète recipe.  Here is my recipe for Moules Marinières straight from my belle-mere’s cookbook.

How to eat an Oyster

There’s no perfect way to eat an oyster, per se, but the following is a good guideline on how to eat them and taste them.  You will need 6 oysters, 2 slices of lemon or sauce au Mignonette (red wine shallot vinaigrette), champagne, dry white or rosé wine, sourdough /or baguette and salted butter.

As I said earlier I have a special little spot near me where we regularly go and eat fresh oysters and mussels.   This place is one of many hidden jewels of my region (Mediterranean) and most definitely off the beaten path.  Its freshness,  simplicity and beauty takes your dining experience to another level.   As you enter the warehouse of Atelier&Co, you pass directly through the entire processing area of the sea farm.   Once you reach the end of the usine, the beautiful terrace of the restaurant is directly in front of you, facing the sea.  It has some of the best views in the area, not to mention an impressive wine list to go with that view.   There are only two things to eat here, served hot and cold: oysters and mussels.  Imagine having your lunch or dinner on the docks where the shellfish was farmed from earlier in the day.

The charming, Laurent Arcella, is owner and operator with his family, and a fourth generation fishermen from the area.  I’ve had the pleasure of meeting him several times, both at the Atelier and the trade events around Montpellier.  He has an impressive resume too having won over 15 prestigious national awards for his products.    He is usually at the restaurant, but you can find him also at the Estivales de Montpellier (every Friday from July 12 to August 30th), the Salon Regal at Toulouse (December 13th to 16th); and the Salon de l’Agriculture in Paris (February 2020).

It really is the low carbon footprint, farm to table concept that everyone loves.  No middleman involved, nor transportation necessary and the prices prove it.   For the real authentic experience, Atelier&Co is for you and opens from April to October.

Mussels have the most impressive nutritional profile of all shellfish.  Containing  high levels of fatty acids EPA (eicosapentaenoic acid) and DHA (docosahexaenoic acid). These fats have many beneficial effects, including improving brain function and reducing inflammatory conditions, such as arthritis.  Mussels are also a brilliant source of vitamins and important minerals, such as zinc, which helps build immunity.  Mussels even contain levels of iron and folic acid to rival red meats.

Oysters too, are high in zinc, which is good for your immune system, and also provide calcium, vitamin C, omega 3 fatty acids, iron, and protein.  Not to mention they are an aphrodisiac, oysters can help boost sexual performance and libido, primarily in men.

And remember, The World is Your Oyster, so hurry up and eat some today.

Health advisory: There is a risk associated with consuming raw oysters or any raw animal protein.  If you have chronic illness of the liver, stomach, or blood or have immune disorders, you are at greatest risk of illness from raw oysters and should eat oysters fully cooked.  If you are unsure of your risk, you should consult your physician.

← Annecy, the Pearl of the French AlpsNîmes, The French Rome →