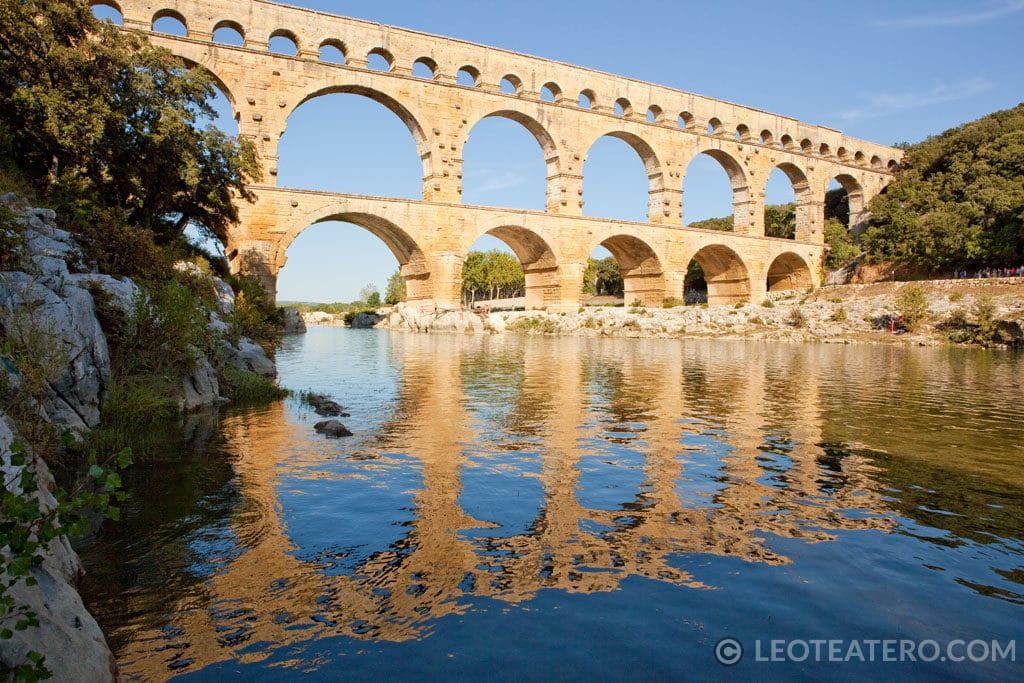 When living in the south of France, you are surrounded by such ancient history it is sometimes hard to fathom for a north American.  The region around Nîmes (formerly known as Nemausus in Roman times) was notably one of the busiest and prominent regions of Roman Gaul, from which still remains numerous vestiges and monuments still visible and accessible today.  Founded in the 1st century BCE by a Celtic tribe who immigrated from the Danube region 2 centuries earlier, and with the support of Augustus in exchange for the tribe’s loyalty, Nemausus was one of the most important cities of the time with over 20 000 inhabitants, over a thousand years before the founding of Montpellier.

From the Roman occupation of Gaul between the 1st century BCE to the 5th century CE, many great sites still remain.   Arenas such as the Arles’ antique theater and Nîmes’ arena where concerts and corridas still take place today, temples such as the Nîmes’ Maison Carrée, old Roman roads whose remains you can still find on a hike in the wild, such as the Via Domitia which used to link Rome to Spain, or reclaimed ruins of villas where stunning tile work can be admired.

Living amongst such history is marvelling, yet quite humbling.  It is however a chance to imagine ourselves living in a different and almost mythical world, when the human genius was as strong but the social environment much harsher.

One of the most beautiful remaining Roman monuments in the world is located not far from us close to the village of Vers and the gorgeous little historical and trendy town of Uzès, in the Gard district (roughly 60 km from Montpellier just east of Nîmes and Provence, a 20 minutes drive from the TGV station in Avignon).  The Pont du Gard is the highest aqueduct built in the Roman Empire and it is 2000 years old.  Because of its historical value and exceptional condition it has been inscribed in the prestigious UNESCO World Heritage Site list since 1985.  This place just oozes history.  There are even four grottos covered in prehistoric drawings dating back 75,000 years.  It demonstrates the first evidence of human occupation dating from the Middle Paleolithic era and includes remains of fossilized animals and flint tools. 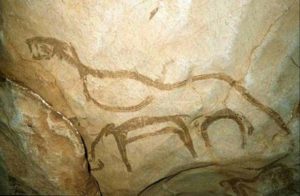 Marcus Vipsanius Agrippa, the Roman General and architect, built the Pont du Gard Roman monument in 50 CE.   He was close friends with Julius Caesar Octavianus, maternal grandfather to Caligula, and maternal great-grandfather to the Emperor Nero.  The Pont du Gard is the principal construction of a 50 km long aqueduct that supplied Nemausus (Nimes) with water.  Built as a three-level aqueduct standing 50m high, it allowed water to flow perpendicular above and across the Gardon River.

The highest part of the structure is made out of blocks joined together with mortar.  A device designed to bear the water channel, whose stone slabs are covered with calcium deposits from the ages, tops it. In designing this three-story bridge, which measures 360m at its longest point along the top, the Roman architects and hydraulic engineers created a technical masterpiece that stands today as a work of art. Archaeologists also uncovered evidence of how well organized the project was. They found numbering on the stones, points of support for scaffolding, and evidence of the use of hoists. 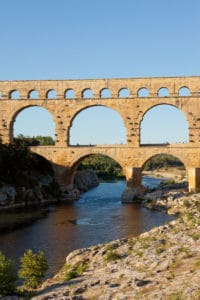 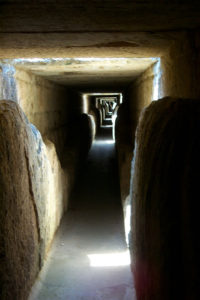 The bridge is constructed out of soft yellow limestone blocks, taken from the nearby Estel quarry, situated roughly 600 m away from the monument on the Gardon River’s left bank. The rock found there is a soft coarse yellow limestone, referred to locally today as “pierre de Vers” (the stone of Vers). The blocks of limestone were extracted using picks and sharp metal corners.  Around 120,000 cubic metres of cut stone were extracted, not only to build the Pont du Gard, but also to construct the various bridges and culvert supports that went into making the aqueduct that stands downstream on the right bank. A huge advantage of the location of the stone quarry, on the edge of the Gardon River was that the rock could be transported by boat to the building site on the river’s right bank. 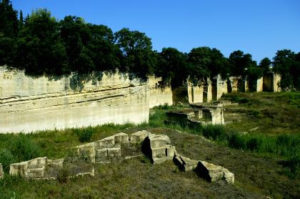 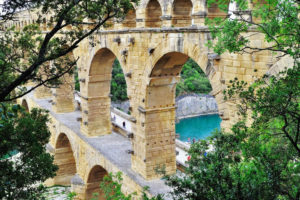 Among the many travellers who visited this site to glean some wisdom from the ancients were famous painters such as Hubert Robert. He painted a number of works inspired by the poetry he saw in Roman ruins found in France and Italy. Among these is an oil painting showing the Pont du Gard placed within a fantasy landscape.  Painted in 1787 for a salon in the Palace of Fontainebleau, this work today belongs to the collection known as the Principal Monuments of France and is displayed at the Louvre Museum in Paris.  The aqueduct also inspired many of the more modern day French bridges, including the famous Pont d’Avignon (remember the French song?  Sur le Pont d’Avignon, on y danse). 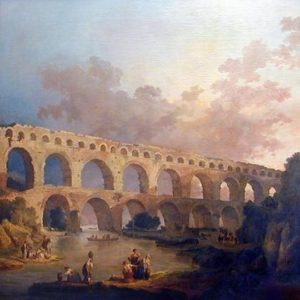 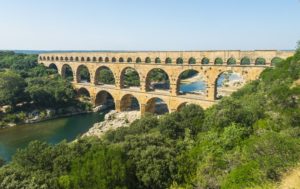 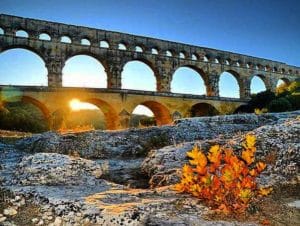 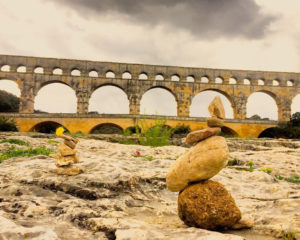 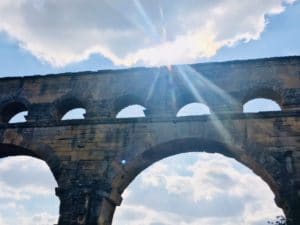 Before 2000, the site of Pont du Gard had no infrastructure whatsoever to welcome visitors nor was able to offer basic services like providing information to tourists.  The chaotic road signs surrounding the monument were of little help and visitors that walked the varied paths to reach the aqueduct bridge were unwittingly damaging the garrigue environment. Up until 1996 cars, trucks and coaches could drive on the Pont du Gard and the heritage site suffered badly from its proximity to road infrastructure such as roundabouts and a parking area. 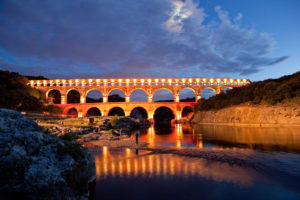 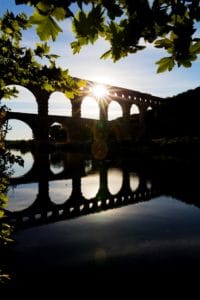 Between 1996 and 2000 an extensive site management plan was developed within a 165-hectare perimeter around the monument by the Department of Gard’s authorities with the support of the Regional administration (Conseil régional du Languedoc Roussillon), the French state and the European Union. The plan aimed at conserving the site and offering a quality environment and cultural content for visitors. The philosophy of the new site can be described in four major points: protecting the environment, offering a quality welcome to visitors, transmitting the knowledge of the Ancient city of Nîmes aqueduct and developing the local economy. A new life was restored to the natural space around the Pont du Gard.

It was made into a fully pedestrian area and all traces of the previous abuse restored.  So be prepared to walk while visiting the site and note that most of the site is wheelchair accessible.  The parking lot is about 500m away from the bridge.   There are also several belvederes on either side of the River for those interested in a bit of a hike.   You can also swim and kayak in the river. 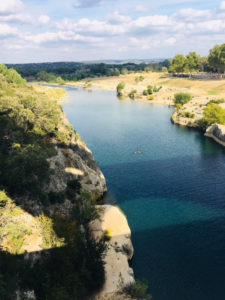 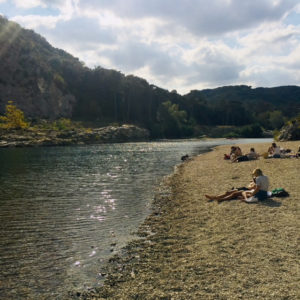 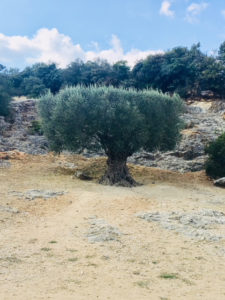 Visitors to the Pont du Gard can now delve deep into Roman history in the Museum that tells the story of the Roman aqueduct in Nîmes and the Pont du Gard by way of a 2400 m2 multimedia route.  The full range of museum exhibits is used to tell this epic: scale reproductions, models, experiments, artifacts, maps, image shows, multi-screen displays, films, sound theatre and more.  The Museum invites you to discover a work of art, the construction of which in the 1st century CE, bears witness to the remarkable technical and architectural abilities of the town and river civilization with its multiple and sophisticated skills.

Since being restored and made safe, the channel of the aqueduct located on the 3rd level of the bridge at 48m high is now open to the public.  It can be crossed accompanied by a guide. Understanding the flow, the build, and the water tightness of the water route is now possible. Several guided tours are organized for the public in the summer, and all year round for groups. 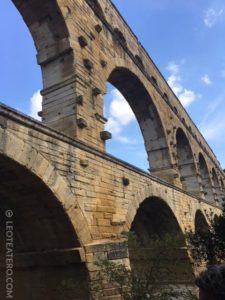 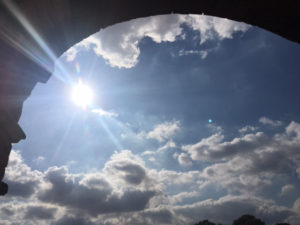 Rehabilitation of “l’Hôtel du Pont du Gard”, built in 1865 and located opposite the Pont du Gard, began in 2000 as well.  After extensive restoration work, this beautiful manor house has been returned to its original character, size and façade.  In 2010 its interior was refurbished with a contemporary design.  Today the building once again serves its original purpose: a gastronomic restaurant offering regional cuisine and holding milestone events near the bridge.  Imagine Pont du Gard as the backdrop for your wedding or anniversary photos!  I would love to produce a wedding here. 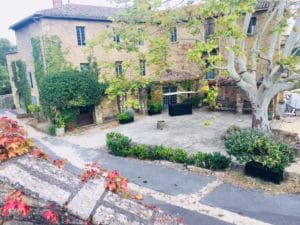 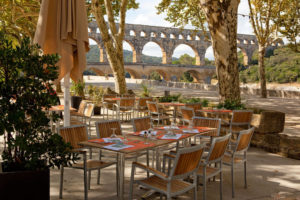 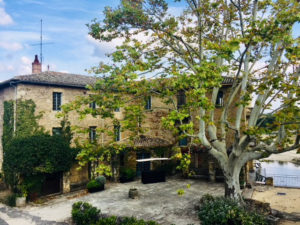 We really enjoyed our time at Pont du Gard.  It is a relaxing place, great for hikers and equally lovely for those wishing to lounge and have a picnic on the banks of the Gardon River.   Be sure to consult their website for regional events taking place and don’t forget there is a light show which takes place during the summer months.

Today, two millennia after it was originally created, Pont du Gard remains one of France’s top five tourist destinations, with more than 1 million people visiting it every year.   Not bad for an old bridge!

PS – I would like to thank the Grand Site du Pont du Gard for their wonderful aerial photos as well as a dear friend, Kirsti for the rest.

← High Time for Pie TimeParis, the City of Light →