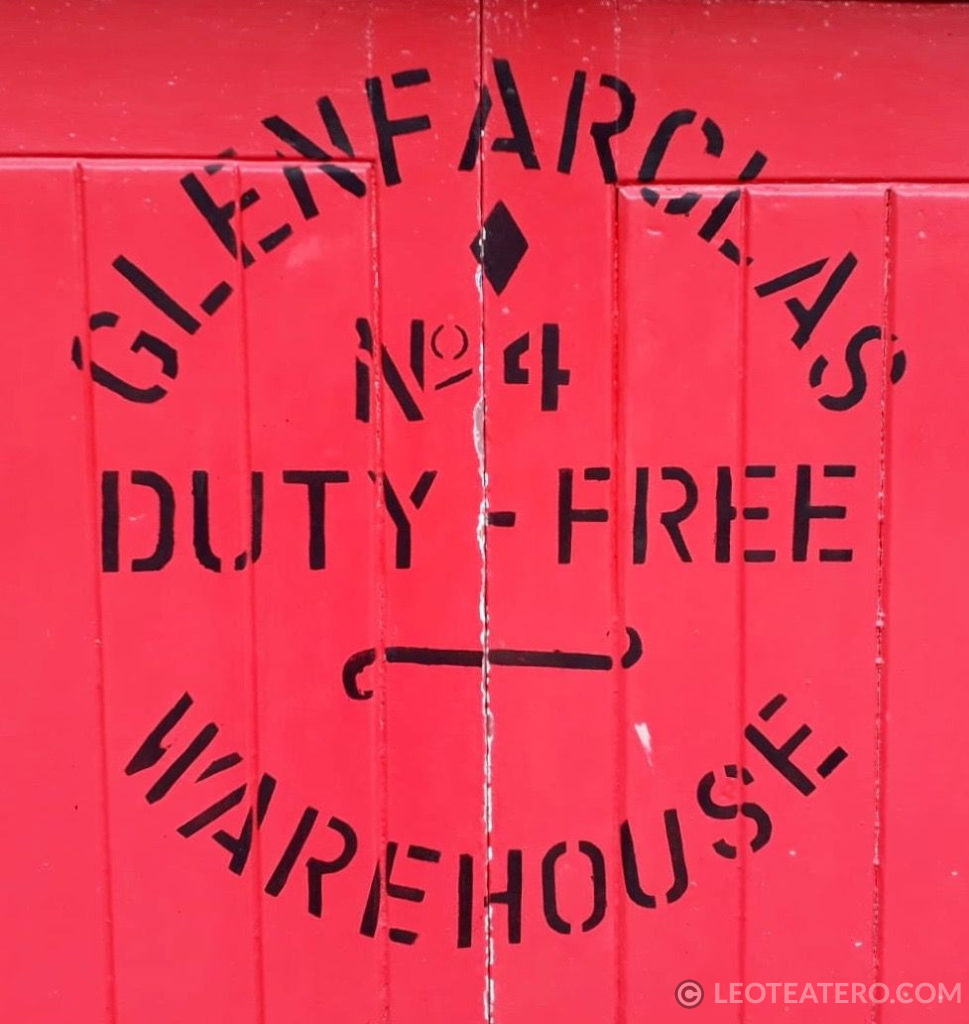 I recently had the opportunity to travel to Scotland and tour the Glenfarclas Scotch Whisky Distillery in the Highlands.   We had a wonderful time, the view, the land, the people, the Bed and Breakfast homes and oh the Pubs!  I will write more about our 10 days journey in Scotland in another blog, but I wanted to first talk about one of their most treasured possessions –  Scotch Whisky.  For those don’t know much about spirits, Scotch is a strong caramel coloured drink called a dram, filled with history, tradition, artisanship and the finer things in life.    It is defined and regulated by the Scottish Government and like Champagne production in France, it is a highly prized product around the world from the Americas to Europe to even Asia.

The story of The Glenfarclas Distillery is as rich and colourful story of the Grant family.  Crofters (Gaelic for farmers), the Grants who have been creating Scotch Whisky since 1865.   On the 8th of June that year, John Grant acquired the tenancy for the Rechlerich Farm.  Part of the transaction was also  the purchase of Glenfarclas Distillery for £511.19sd (about £10,000 in today’s value).   To this day, Glenfarclas Distillery is only of a few distilleries in Scotland to remain family-owned and managed and is now in the hands of the fifth and sixth generation of the Grant family.  To read further about the Grant Family History, please visit their website here. 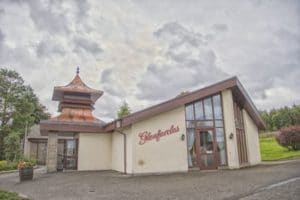 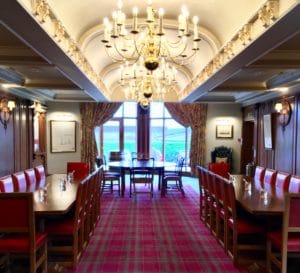 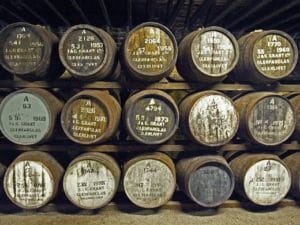 Our tour host was Sarah Renau Cére, an Oenologist graduate of the Université de Montpellier.   She is an expert in science of wine, wine making and scotch making and an employee of the Distillery.  We were given a tour of the entire facility including the production rooms as well as the dunning warehouses.

To produce Glenfarclas Single Highland Malt Scotch Whisky, these three essential ingredients are required: pure spring water, malted barley, and yeast.  These ingredients, combined with the unique size and shape of the copper pot stills, traditional distillation methods, the specially selected oak casks, and the style and location of the warehouses, are all important factors determining the final unique character of the whisky.

The heather clad slopes of the 814 metre high Ben Rinnes Mountain, purple in autumn and snow clad in winter, rise up majestically behind the distillery.  The melting snows of winter seep down through the peat, deep into the granite below, rising up as pure, crystal clear spring water, soft and slightly acidic, ideal for making whisky.  The water in Speyside (the region) is exceptional for producing malt whisky, and over half the distilleries in Scotland are located in this area.  The barley is usually grown in Scotland, and often in the local area of Moray; prime barley-growing country.  Below you can see the small water wheel turning out the spring water for the distillery. 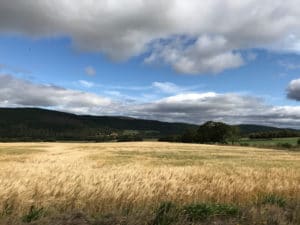 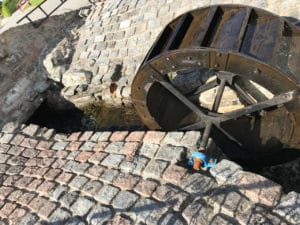 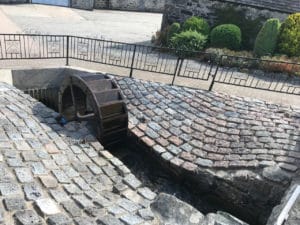 The production of whisky is comparably easy.  You basically make beer, and then distill it twice in copper pot stills. The spirit is then aged in oak casks for at least three years but more usually a minimum of ten years.   Special vintage single malt whiskies can be aged for decades.  I will explain how to taste and nose scotch later, but let’s look at the exact steps of how Scotch becomes the drink of Scotland.

The actual breakdown of how Single Malt Scotch Whisky is made …

MALTING
The harvested barley is first soaked in the local spring water to trigger the germination process. During germination, the starches in the grain are converted into a doable form and enzymes are produced. 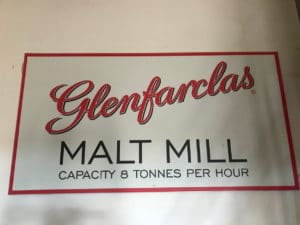 STEEPING OR SOAKING
The barley is steeped in water in a Saladin box (a Steeping, Germination and Kilning vessel) for 24 – 36 hours. Steeping increases the moisture content of the barley to 46% and triggers the germination process.

GERMINATION
You let the barley sprout (geminate) again until the starch of the grain has become malt sugar. Temperate, humidified air is blown through the germinating barley.

KILNING
Over a 24 – 48 hour period the ‘green malt’ is dried carefully, to halt germination, and to reduce the moisture content from 43% to the required 4.5%. During kilning complex chemical reactions take place. Amino acids and sugars are breakdown to produce distinctive roasted, malty flavours in the barley.

MILLING
The malted barley is ground in the five roll Buhler mill, into “grist”. The grist consists of three parts: 21% husks (coarse), 74% grist (medium) and 5% fine flour. It is important that these proportions are correct, so the extraction of fermentable sugars during the mashing process is as effective possible. 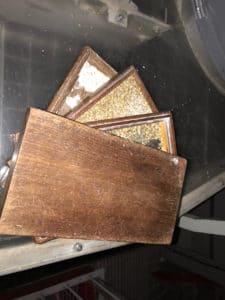 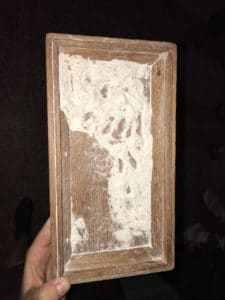 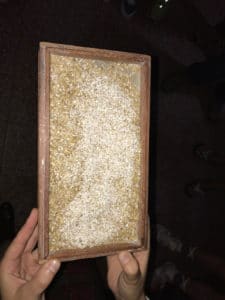 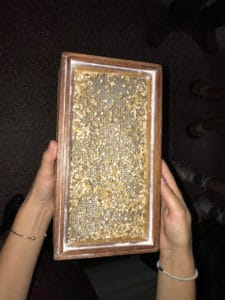 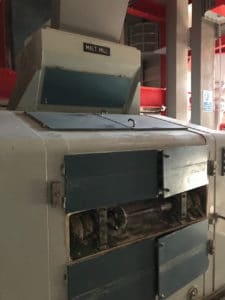 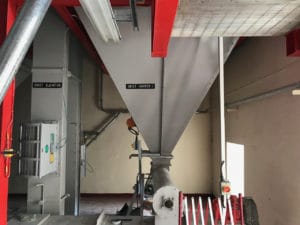 MASHING
During mashing, hot water is mixed with the grist, enabling the starches present in the grist to be converted into sugars in a tun. The sugars, once soluble, dissolve in the hot water and are extracted as sweet “worts”, which are vital for fermenting into alcohol. At this point is it basically beer without hops. 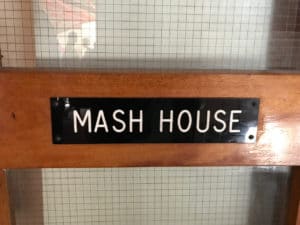 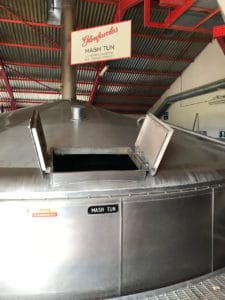 FERMENTATION
The wort from the mash tun is cooled to 20C, before the 100% cultured Distillers’ yeast is added converting the sugars into ethanol, and producing heat as a by-product. During the 48 hours of fermentation, the temperature will increase by approximately 10C.

During this process, sucrose, fructose, glucose, and maltose are fermented and minerals such as zinc, amino acids and fatty acids and some malt derived flavour compounds are used by the yeast for growth, producing flavour compounds. These compounds, ethanol, higher alcohols, ethanal, organic acids, esters and carbonyls, all contribute to the individual flavours of the different Single Malt Whiskies. For example, chemical reactions between the various acids and alcohols produce esters, which have characteristic ‘fruity’ or ‘flowery’ aromas. 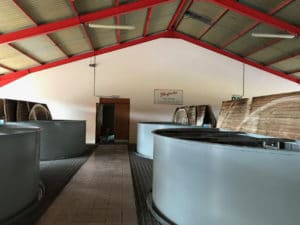 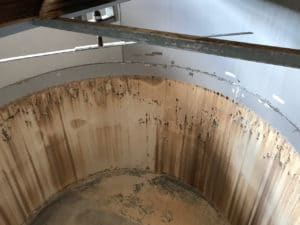 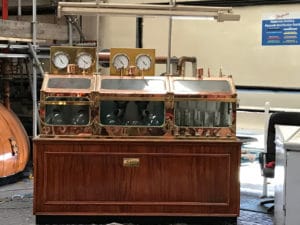 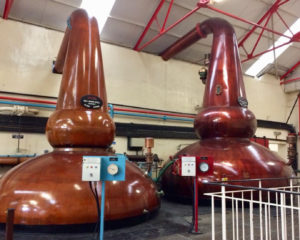 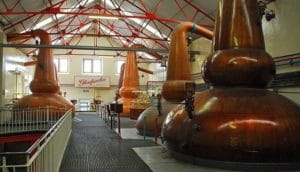 MATURATION
To obtain the title of Scotch Whisky by law, the new spirit must be matured in oak casks, with a capacity no greater than 700 litres, in a warehouse in Scotland, for a minimum of three years.

At Glenfarclas their Scotch is matured in 100% sherry oak casks, which have ripened Oloroso in Seville, Spain. With a capacity of 500 litres sherry butts are widely used at Glenfarclas, along with 250 litre sherry hogsheads.

Charring the casks releases carbon, which helps mellow the whisky. In the traditional style ‘dunnage’ warehouses, dating from the 1880’s, and consisting of thick, stone walls, with earth floors, the casks lie sleeping for a minimum of 8 years. During this time the casks are not disturbed, and the spirit evaporates at 2% volume, which also reduces the alcohol content by an average 0.4% alcohol by volume (abv) per year. This is known as the ‘Angel’s Share’. 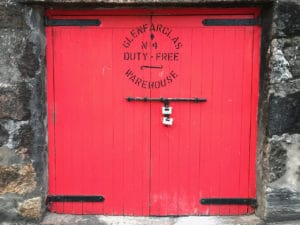 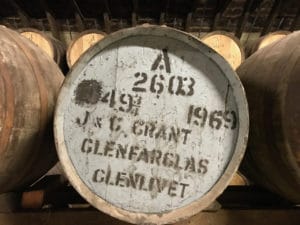 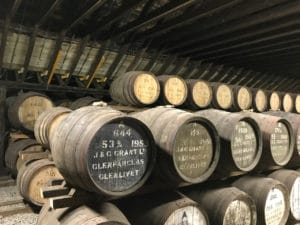 Glenfarclas is bottled at Broxburn Bottlers, near Edinburgh.  Most distilleries use outside services to bottle their products.   Prior to bottling the casks are emptied into vats, enabling the flavours to ‘marry’ together.  All Glenfarclas is bottled at natural colour. Depending on the age selected and the stocks available, the ratio is usually two-thirds first or second fill sherry casks to one-third third or fourth fill sherry casks. 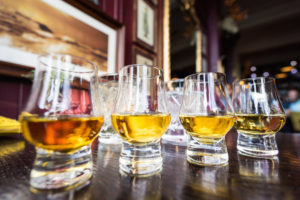 1. The Glass
The Choice of glass is important. A tulip shaped is considered best to channel the aromas up to your nose, like most wine glasses. There is also enough space under the band to allow warming in the hand.   A claret glass is the traditional whisky dram.  You hear right, Scotch Whisky should be served at room temperature and a shot is called a dram.

2. Colour
Look at the colour of the whiskey; it can give a clue to the type of cask used.   Different casks give different tastes, so many distilleries use a selection of sherry, refill sherry and plain casks.   Sherry-casked spirit is usually darker although this is not always the case.   At Glenfarclas they have not added any colouring or flavouring.  Which is why their bottles are clear, so you can clearly see the appearance of the whisky, something that many producers do not do.

3. Nosing
Have a good sniff, initially without water.  As the nose is more sensitive than the tongue, this is one of the most important points is tasting.  Remember the nose has thirty-two primary smells and the tongue only four primary tastes.

4. The Legs and the Body
Swirl the whisky around the glass until you get a rim of whiskey around the edge.   Now, watch the droplets run down the sides;   Again, just like in wine, these are called ‘legs’.   The further apart they are the more body your dram has.

5. Taste
Now take a small taste and let it sit on your tongue for a while. Wait until the prickly or burning sensation reduces, then, take in all of the flavour notes. Savour and enjoy.

To add water … or not
Some people like to drink their whisky neat. However by adding a drop or two of water you will break the surface tension and release many more aromas and tastes.  But, DO NOT ADD ICE.   Rather than enhancing flavours, it inhibits them as the ice makes the temperature of the whisky drop rapidly. 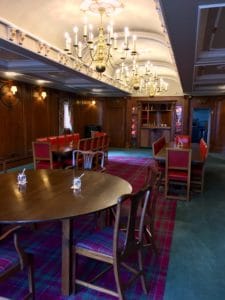 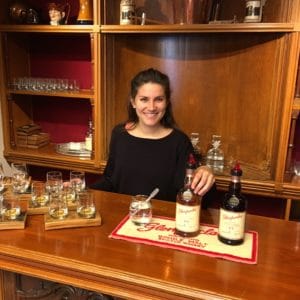 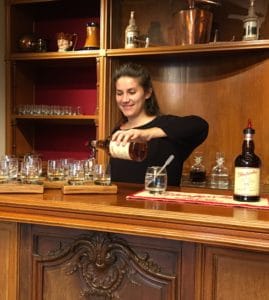 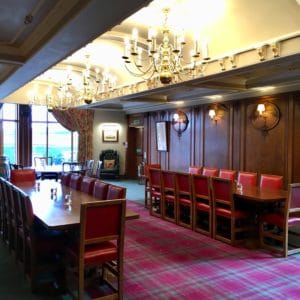 We had a wonderful time at Glenfarclas and I would like to thank them personally for showing us around.   We of course, purchased a few bottles at Glenfarclas and I urge you to do the same especially when it comes to supporting the smaller family-owned Distilleries.   If you are interested in touring the facilities at Glenfarclas, it is open year round., but do check on their website for the hours or the tours and do book ahead.   Remember the smaller, more independently run operations as they, like Champagne tend to give you more bang and taste for your buck, as compared to the well known brands who possess huge marketing campaigns to get their product front and centre.   Other Whisky likes Tomasin or perhaps Tobermorey, which is made on the Isle of Mull in the highlands.