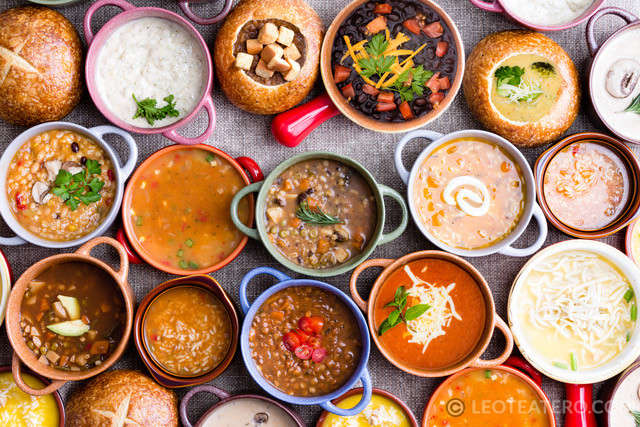 Is a well-known expression that means dinner is on the table ready to eat, and while it might not be such a catchy saying anymore, soup remains a favourite at the table.   A lot of my favourite recipes are actually for soup.  Mostly because it doesn’t take a diploma in cooking to make soup and it somehow manages to make you feel better.  I also like them because it usually makes a lot of food, lots for the freezer for storage on non-cooking days.  The long cooking of soup enables food to be created from small quantities of fish and meat too bony or tough to be otherwise used.

Soups can be divided into two groups, clear soups and thick soups.  Soups can be consumed hot or cold and flavors can be sweet or savory.  The word soup actually comes from the French word souper, meaning to eat.   Historians agree that it has been around since the dawn of cooking.  Mixing various ingredients in a large pot, with a liquid base, to create a nutritious, satisfying, easily consumed food that would last several days was inevitable.  This made it the perfect choice for both rich and poor.

Whether you are adding vegetables ends and boiling them down with some chicken bones, or you are pan-frying feel good root vegetables, it all turns out well because it is about the blending of tastes together in a broth.   The extraction of the flavours is the secret to soup, and also why soups can sometime take hours to make.  Soup is also not difficult to make, and can be kept warm for hours and many can be frozen without damage to them.

I have pulled together some of my favourite recipes to share with you.  With these warming and easy recipes you’ll be swimming in soup for the cooler seasons coming our way.  So let’s talk soup!

I have many favourite formulas, from pan-frying aromatic vegetables and herbs in butter to boiling thick bones for hours to reach just the right consistency of taste to achieve perfect and satisfying liquid food.  We need fluids and warm soup and other hot liquids are a great way to get them.  Even if our appetites are diminished we tend to be able to eat at least a bowl of soup.

Beethoven once said, “Only the pure of heart can make good soup”.    I’d like to think my heart is true. So, I will happily share my proven recipes with you and it will be our little foolproof secret.

The first one is the most important soup to make, Chicken Soup.  It also is a basic broth that could be adjusted for any kind of meats (beef, pork, lamb, with complimentary vegetables or lentils).  We have the ancient Greeks to thank for combining chicken and broth. They believed chicken broth cured most everything.  But what we now know is that chicken bouillon is a cleanser.  Just like other warm fluids such as tea, the steam and salt from chicken broth helps in relieving congestion and clearing sinuses and airways.   It also causes blood vessels to open up, increasing blood flow to that area.   The root vegetables, like carrots, onions and garlic deliver vitamins A, B and C, plus antioxidants, and the chicken offers protein- all of which can help boost the immune system.  Chicken soup is rich in essential micronutrients and it is clear that is one of the reasons we feel better – it’s nutritious.

My Chicken Soup Recipe is based on both my mother’s and Martha Stewart’s recipes, with a few upgrades from me.  It is a sure fire way to lift one’s spirits when they are sick with a cold or the flu.  Be sure to always have two containers frozen in the freezer for emergency cold battles.  My chicken noodle soup recipe makes about 6 liters, so be sure to use a large pot.

In France, one of the most popular soups is Bouillabaisse de Marseille.  It is said there are as many versions of this recipe as there are students from Le Cordon Bleu Culinary Institute in Paris, established in the late 19th century (est. 10,000).  But it originally started as a poor fisherman’s broth and now has become an important soup in a French Chef’s repertoire.   Restaurateurs in Marseilles even went to far as to set up a charter, official ingredients and preparations list to ensure authenticity of the Marseillan favourite.  The American food goddess, chef and writer Julia Child, who lived in Marseille for a year, wrote: “to me the telling flavor of bouillabaisse comes from two things: the Provençal broth base—garlic, onions, tomatoes, olive oil, fennel, saffron, thyme, bay, and usually a bit of dried orange peel—and, of course, the fish—lean (non-oily), firm-fleshed, soft-fleshed, gelatinous, and shellfish.”  I had to include a recipe for this soup too.

Another huge French favourite is Soupe à l’Oignon Gratinée aka French Onion Soup.  There are two competing legends, which both involved King Louis XV.  The first is that his family was hunting all day and returned to the castle and there was barely any food, except onions, beef, bread and cheese. They put it all together and voila the soup was born.  I highly doubt this version of the history.

The second and much more believable story is that the Duke of Lorraine (also the ex-King of Poland) Stanislas Leszczynski stopped in a hotel on his way to visit his daughter, Queen Marie, the wife of Louis XV.  It was the restaurant of Nicolas Appert, the father of food preservation, the inventor of an air tight sealing system and the man who started canning.  The Duke thought that the soup was so unbelievably good, he stayed up all night learning how to make it for his daughter and son in law. In his cookbook published in 1831, Appert dedicates his recipe to the royal, naming it the l’oignon soupe à la Stanislas.

It is unclear as to whether the Duke actually made the soup for the King and Queen, but it did quickly catch on quite quickly at Versailles and not just because of its hearty taste.  The French realized quickly that onion would cover the smell of a heavy night of drinking and it gained the nickname “the soup of the drunkards”.  Today, it Onion Soup one of the preferred cures for hangovers in many French households and in Paris at night; you will find bistros serving many of them to their late night crowd. Check out my step by step photos of the onion soup.

I have fond memories from my childhood of my father making French Canadian Pea Soup.  Dad would cook this on a Sunday morning and it would permeate the house with the most wonderful smell of onions, garlic, peas and ham.  We would always eat it with big pieces of white bread and butter.  It never lasted long in our home, usually gone within the day. Enjoy!

I cannot talk soup without mentioning my favourite quick and easy soup – Lemony Lentil Soup.  This spicy little number takes about 25 minutes from start to finish to make and is think, hearty and is a huge hit at my table.

I also have a few quick tips to help you in making your soups easily and affordably as well as from scratch.

Perhaps just as important, usually behind that bowl of soup is someone caring for us or memories of someone doing that.  And that certainly makes chicken soup good for the soul.

Moliere, who is to France what Shakespeare is to English once said “Je vis de bonne soupe, et non de beau langage”, which translates to “I live on good soup, not on fine words”.

← Le Corbusier: On the Hunt for Art & ArchitectureChâteau de Versailles →