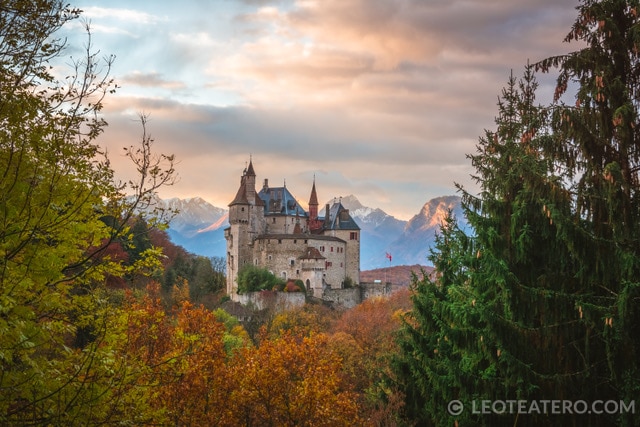 I am always on the hunt for new and exciting properties for my clients and I recently had the pleasure of visiting a medieval chateau located just a few miles outside of the Pearl of the Alps, called Chateau de Menthon St. Bernard.  The chateau sits high on a perch overlooking Lac Annecy, where it has been guarding the area for over a millennium.  It has many wonderful spaces including their grand event space located in their wine cellars. This beautiful venue is as rich in history as it is in charm, and today I will share with you 7 things you didn’t know about Chateau de Menthon.

The first things you might not have known, is that like many great chateaux it evolved greatly over time. However, one thing was constant and that is it was owed by only one family, the Menthons.  There are 23 generations of Menthons but it’s most famous member and resident was Bernard of Menthon otherwise known as St. Bernard, the patron saint of skiers, later I will talk more about him.

The first fortress was built around 923 CE. It was mostly a guard post built from local timber along a Roman road. As soon as the Menthon family arrived and took-up residence in the chateau, just after the turn of the first millennium, they constructed the three big square towers.   They continued making improvements for the next three centuries, with its first big transformation during the Renaissance Period (15th to 16th centuries), the medieval fortress was renovated into a sumptuous residence and seat of the Barony of Menthon.  Apartments took the place of the round walk between the towers and the Menthon family bought a large quantity of furniture.  The general appearance of the castle remained unchanged until the late 17th century, when it was updated to create a more home like feel instead of a fort.   A dining room and spacious grand hall with large stained-glass windows was installed overlooking the lake and valley.  The Countess’s bedroom has the same view from above.

In the 19th century, the castle was renovated again but this time restyled by Count René de Menthon, a fervent disciple of Viollet-le-Duc, famous for his restorative work on Notre Dame de Paris, Mont St. Michel and the Basilica of Saint Denis.  It is his work that gave the château the appearance it has today.  The castle has 105 rooms on four levels and spreads over several hundred square meters. Visitors can admire beautifully furnished rooms, in particular the Countess’s Bedroom, 13th century kitchens and the great hall, admirably decorated with pictures and antique furniture dated between the 16th and 19th centuries, Louis XIII and Louis XIV furniture, a Gobelin tapestry from 1730 and others from Aubusson.

The second interesting thing about the chateau is that the library contains more than 12,000 works from before 1800, including incunabulum and ancient manuscripts written on parchment, sheepskin or goatskin, with painted illuminations from monks of the Middle Ages.  The bulk of the books date from the 16th, 17th and 18th centuries but there is also one book that is 900 years old!

The third thing you might not have know is that, one of the most famous Menthon was Bernard de Menthon.  He was born in 1020 and became a priest when he reached adulthood.  He went on to build the hospice and monastery at the Great St. Bernard Pass, the third highest passage in the mountains of the Alps at just under 2500 meters of height.  The hospice became well-known for their specific breed of dog, the St. Bernard, used in rescue operations of the high Alps.   Bernard de Menthon was canonized by Pope Innocent XI in 1681 and later was confirmed as the Patron Saint of the Alps in 1923 by Pope Pius XI.

The fourth really interesting thing about the chateau is that under the direction of St. Bernard de Menthon, group of monks maintained the hospice, took care of guests, acted as guides through the pass and were the only search and rescue teams for travelers who had gotten lost or injured.  At some point, the monks began to train their dogs, who were brought from the villages in the valleys below to serve as watchdogs and companions, as rescue animals.   Unfortunately, the hospice burnt down in the 16th century and the archives were lost, so we are unsure of when and how dogs were introduced. The earliest written records of the St. Bernard breed are from the early 17th century, with paintings and drawings of the dog.

The ancestors of the breed of dog St. Bernard share a history with the Swiss Cattle Dogs, called Sennenhunds.  The St. Bernard, which is also known as the Alpine Mountain Dogs or Alpine Cattle Dogs, are the large farm dogs of the farmers and dairymen.  These animals were essential in guarding livestock, herding and even pulling carts, but they also worked as watchdogs, hunting dogs and search and rescue dogs.  The dogs, with their strength, weather-resistant coats and superior sense of smell, were well-equipped to guide and rescue travelers.  The dogs are often depicted as carrying a small flask of brandy around their necks to revive travelers. While this appears to have generally been a 19th century myth, there was apparently at least one dog that really did.  However, you would not want to drink brandy or any other alcohol if you were trapped in the snow.   Alcohol causes blood vessels to dilate, resulting in blood rushing to your skin and your body temperature decreasing rapidly, ergo you freeze to death faster.

The fifth thing that is really cool is the most famous St. Bernard to save people at the pass was Barry, who reportedly saved somewhere between 80 and 100 lives. There is a monument to Barry in the Cimetière des Chiens, and his body was preserved in the Natural History Museum in Berne.  The classic St. Bernard looked very different from the St. Bernard of today because of cross-breeding. Severe winters from 1816 to 1818 led to increased numbers of avalanches, killing many of the dogs used for breeding while they were performing rescues. In an attempt to preserve the breed, the remaining St. Bernard dogs were crossed with Newfoundland dogs, brought from the Colony of Newfoundland (Canada) in the 1850s, and so lost much of their use as rescue dogs in the snowy climate of the alps because the long fur they inherited would freeze and weigh them down.   Today you can still find St. Bernard dogs on site at the hospice, but they are kept as pets and no longer used in rescue missions.  Instead, heat sensing technology and helicopters are the norm today.

A sixth item about the place is that they had another famous family member, François de Menthon, father of the current count, who was an important  lawyer and member of the Resistance during the 2nd World War, who represented France at the Nuremberg Trials.  He worked for the creation of a united Europe and was Minister of Justice under Charles De Gaulle, whom he also hosted many times in the castle.

And the seventh and final fabulous fact is that this chateau is an idyllic setting for your wedding, baptisms, cocktails parties, anniversaries celebrations and also professional events like seminars, conferences, team building.   The event space is located in the Chateau’s spacious wine cellar which has 360° views of the surrounding mountains and lake.  Events can include private tours of the chateau, with staff in period costume. If you are interested in holding an event here, I would be happy to work with you to design your dream weekend. Contact me and I can offer you a free consultation.

Chateau St. Bernard is open from May to September. In summer, the visit is augmented by a troop of young actors who relive the past of the castle. Each year there are some 40,000 visitors.  The chateau also offers Le Brunch by Maison Casali, every Saturday from the 19th of July to the 30th of August.