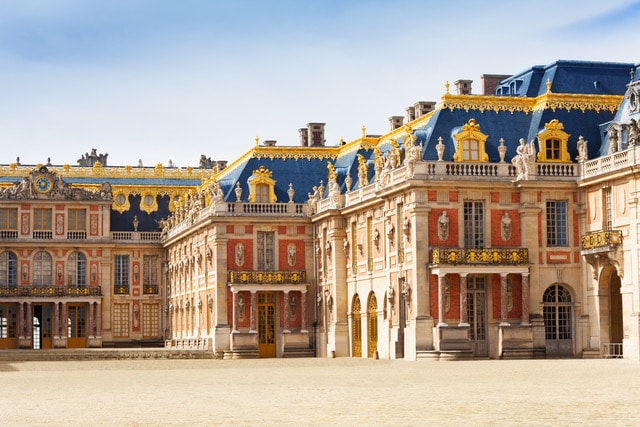 Recently, I had the pleasure to tour Château de Versailles with a dear friend, Kirsti who was visiting from Canada.   We had a superb time and discovered that the history of the Palace of Versailles is not as old as some of the other royal palaces, but it definitely has lots of drama.   It was first a hunting lodge built by Louis XII, the later transformed into a huge palace by his son, Louis XIII.  For one hundred years the royal family enjoyed the place and used it as the seat of power.

France is the most visited tourist destination in the world with over 70 million visitors per year.  Château de Versailles has more than 8 million people pay annual visits, making it the second most visited monument in France.  It also has the distinction of being Europe’s largest château.  The other royal residence, La Louvre, located in heart of Paris, is the top destination with over 10 million visitors per year, more popular than the iconic Eiffel Tower!

Composed of the palace, the gardens, the park, the Trianon estate and several buildings in town, the Estate of Versailles covers over more than 800 hectares and is located 20 km southwest of Paris.  The Château itself has 2300 rooms, 67 Staircases, 1250 chimneys and 2000 windows and at the height of its success, was able to house 20,000 people comprised of members of the Royal Family, Courtiers and staff.

In 1979, the entire Palace of Versailles domain was declared a UNESCO World Heritage Site. “The Palace of Versailles was the principal residence of the French kings from the time of Louis XIV to Louis XVI. Embellished by several generations of architects, sculptors, decorators and landscape architects, it provided Europe with a model of the ideal royal residence for over a century.”  I would add that is was also the opulent setting for start of the dramatic end of the Royal dynasty and the birth of the Republic of France.

Prior to becoming such a grand castle, Versailles was first a simple hunting ground. In 1607, Louis XIII—the 6-year-old Dauphin (Prince and heir of France) would travel to the area on a hunting trip with his father, King Henri IV and mother, Catherine de Medici.  The land was teaming with boar, deer and pheasants making it the ideal hunting place.  Fifteen years later, in 1623, King Louis XIII would begin building a small palace used as a retreat for the family.  His son, King Louis XIV later would move the entire aristocracy to Versailles and made it their official residence.  It was also became the home to two more French kings: Louis XV and Louis XVI.

Once you have reached the gates of the palace, you enter through the Dufour Pavilion located to the left of the main building.  Ticket verification takes place here and you then move onward through the Royal Courtyard into the Gallery of the History of the Palace, which has 11 rooms devoted to the history of the creation of Versailles.  You eventually reach a staircase taking you to the 1st floor; which leads you through to the Louis XIV Rooms.  These rooms give you an idea of what 17th century life in the Royal Palace was like.  It is followed by the State Apartments, including the ceremonial bedrooms of both King Louis XVI and Marie Antoinette.  The Bull’s-Eye Salon, named for its distinctive oval window, was the anteroom where courtiers waited until the king rose. It leads to the bedroom in which Louis XIV died and that Louis XV occupied from 1722 to 1738.

Also on the 1st floor are the apartments of the Dauphin (Prince and heir to the throne), the, Dauphine (Princess and wife of the heir).  The first floor of the central building is also home to the “over-the-top” apartments of the king and queen as well as numerous salons for entertaining guests and members of court.  Many of these rooms have silk fabric wallpaper and matching drapes along with a stunning collection of art, furniture and porcelain.

Finally you reach the splendid and breathtaking Galerie des Glaces, (aka Hall of Mirrors).  The room itself contains over 350 mirrors reflecting the light cast from the huge wall the ceiling windows facing the splendid gardens and l’Orangerie of the King.   The lavish gallery is fitted with gilded moldings, marble walls and crystal chandeliers. It was here where many of the royal cocktail parties and gatherings would take place. Interestingly enough, in the early years of Versailles, this space was actually a large terrace facing the gardens. Louis XIV eventually had it enclosed.

I also recommend you also visit the Private Apartments of the Kings tour (10€), led by one of the museum’s guides.  The visit, which will take you away from the crowds of the Public Apartments, gives access to Louis XVI’s library, Louis XV’s dining hall and some of the finest pieces of furniture in the world. Your guide may also take you to Louis XV’s wooden opera house, one of the palace’s best-kept secrets.

There are two restaurants within the Palace, located just after the Hall of Mirrors.   The first called is called Restaurant Angeline and is a restaurant tearoom serving sweet and savory dishes all day long.  The Angelina delicatessen has a snack counter and room to sit and taste its delicacies in the two small rooms.  The Ore Ducasse, is a more fine dining experience and a Michelin star restaurant and is located across the hall from the Angeline.   This is a fine dining experience serving breakfast, lunch and dinner.  Do make reservations in advance for your lunch otherwise you’ll have to wait in line (+33 1 30 84 12 96).

We ate lunch at the restaurant and then moved onto Les Galerie des Batailles (Gallery of Battles), which celebrates all of the French dynasties through some thirty monumental paintings and is located in the former private apartments of the King.

The gardens at Versailles were designed by André le Nôtre and later adapted by Jules Hardouin-Mansart, the King’s chief Architect.  Creating the gardens was a huge undertaking, as large amounts of earth were brought in to level the ground, create ornamental gardens, built the fountains (including underground water tunnels) and the canal.  Trees were brought in from different regions of France. Thousands of workers sometimes even entire regiments took part in this colossal project.  The gardens are also home to the l’Orangerie (where his citrus fruits were grown), thousands of sculptures designed by Charles LeBrun, and groves hidden behind huge green walls of shrubs.  Every 100 years, the gardens need to be replanted and so the work is continuous every year keeping this garden in its top form.

One of the great things about touring the gardens is that you can be transported either by the mini-train or rent an electric car (golf cart).  These are accessible as soon as you leave the palace and walk towards the Water Parterre, where they are located on opposite sides of the water feature. The electric cars costs about 33€ and is well worth it as the estate is huge. The trains can drop you at severals spots along the garden tour as well and costs about 5€. Do note though, they do not take any credit cards or bank cards. Its cash only.

There are 35 km of underground pipes, which were built so well, they have barely changed since the 17th century.  A team of 13 fountain engineers manages the 55 pools and fountains along with the 600 water features found throughout the garden.  Fountain shows and musical gardens take place roughly every 15 minutes from April to October.   There are also several small snack bars to grab a coffee and one wonderful restaurant called Grande Café d’Orléan.  It serves contemporary cuisine.

The Gardens are also home to many gardens & groves, as well as the Grand Trianon and the Petit Trianon.   The Royal Family would take refuge from the pressure of court by spending a few days here in the Grand Trianon.

Check out this wonderful 3D video, showing you the gardens at Versailles.

In the Trianon Estate, Marie Antoinette had a hamlet, a bizarre little haven built inside the palace’s park.  It was planned as an escape from courtly life; this tiny village includes country cottages nestled next to streams that feed into grottos, a pond, and a mill wheel. Marie Antoinette would often pass her time in her hamlet, where she’d dress as a peasant and romanticize the idea of a simpler life—before returning to her gilded apartments.

Outraged by this kind of out-of-touch behaviour, the French people began rebelling against the royals in 1789, launching the famous French Revolution. During the Women’s March on Versailles—one of the Revolution’s earliest and most important events—thousands of people encircled the palace, demanding a more fair and favorable price of bread in Parisian markets.  The angry crowd demanded that King Louis XVI, Marie Antoinette, and their children return to Paris. Fearing for their lives, they agreed, and the palace was never lived in again.  Once the French Revolution it immediately stopped being a home and in the 19th century was transformed into a museum, as it remains today.

In 1799, the French Revolution ended and Napoleon Bonaparte took power of France.  Astonishingly, the palace made it through the period of upheaval relatively unscathed, although much of the palace’s art and furniture had been either sold at auction or sent to museums in Paris.

Nevertheless, in 1837 the palace was converted into a museum that “celebrated glorious events in the history of France from the Middle Ages to the start of the July Monarchy.” At the end of the 19th century, however, it was decided that Versailles would be restored to its former self, with efforts ongoing to this day.

To travel to Versailles from Paris by regional trains, take the RER C metro line to the Versailles Château-Rive Gauche stop.  Once you exit the station, the Palace is a few short blocks away.  Do buy your tickets in advance, available online.   You can book your timeslot and arrive within an hour of it for immediate access to Versailles.  If you buy your ticket at the door expect to wait at least an hour to do so if not longer, so book online to insure easy access.  I recommend getting the full passport, which gives you access to the Palace and the Gardens, and also purchase the Private Apartments of the King.

The palace is notoriously busy in high season (June-September). October is much quieter and the gardens are particularly colourful then. The château runs tours throughout the year, but is closed on Mondays. Book your ticket on the website. You will probably still have to wait for admission but you won’t have to face the long queues at the ticket office. Arrive early and visit the château at 9am (opening time), before exploring the parterres and groves between in the late morning and tackling the Trianon and Queen’s Garden in the afternoon.

I would also like to thank the kind people at the Château de Versailles Communications Office for the lovely photos. Others were taken by Kirsti and I.