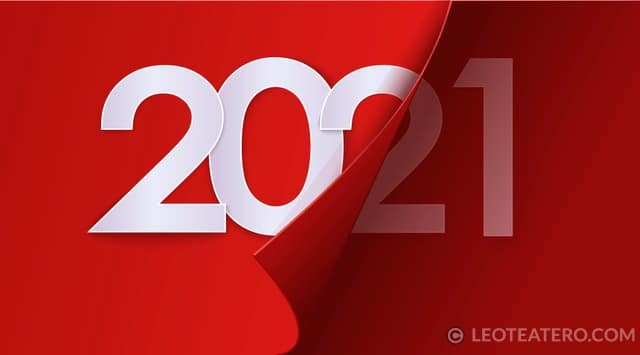 2020 has ended. Let us all rejoice in its passing.  Annus horribilis, that’s what it was.  From a global pandemic with 85 million infected and just under 2 million dead, a complete devastation for the arts and events industry, small businesses and restaurants, Britain leaving the EU, the death of US Supreme Court Justice, Ruth Bader Ginsburg, forest fires devouring Australia and California, the explosion in Beirut and the murder of George Floyd.  It was a harsh year indeed, to say the least.

How do we move on?  Where do we go from here?   Well, simply put, we move forward.  Time waits for no one. We need to accept that forward is the only direction we can pursue.   And moving forward will help us to heal from what many say was the worst year in history.  A great way to start, is to recognize that while many bad things happened, many good things happened too. So let’s talk about that.

For instance, in France, we made advancements in cancer research in Montpellier, in eliminating cancerous tumors in the liver, using world-leading robot technology.  French bicycle sales doubled from pre-confinement levels, with several cities even creating new cycle lanes, known as coronapistes, to accommodate the new trend.   The government doubled the paternity leave for men from 14 to 28 days, a huge win for families.   France also made huge advancements in plastics recycling.  Carbios, a world-leader in bio recycling based near Clermont-Ferrand, developed a revolutionary technology that will make recycling single-use plastics as easy as recycling glass. That’s way cool. And happily, the endangered Pyrenean Ibex (bouquetin des Pyrénées) has returned after this native species to the Pyrenees, was thought to have been completely wiped out over a century ago.  Government officials recently announced a new generation of 70 long-horned wild goats that are now thriving in the Pyrenees National Park.  How great is that? These are just a few local examples happening around me, but if we all look, there are always positive things to focus on.

On a global level, even the coronavirus and confinement gave us positive things: there was a sharp decline in fossil fuels, as more people decided to walk and cycle.  Less cars and less people commuting to work also had a huge change on the environment, making the air cleaner as carbon emissions dropped dramatically.  Lockdowns and stay-at-home orders led to a 40 percent decrease in nitrogen dioxide pollution in Europe.   In China, which has the world’s biggest carbon footprint, emissions were cut by a quarter.  The oceans even became cleaner during this year, with several projects underway by 14 nations protecting 40 percent of the world’s coastlines.  The Venice canals in Italy became clearer and marine life returned, while in the Bay of Bengal, sea turtles started laying eggs on beaches they once avoided due to crowds of people.  In some parts of the world, animals started reclaiming spaces once occupied by tourists.

Black Lives Matter has become one of the biggest movements in history, and rightly so.  People rose up to protest police violence and racism, shining a light on the dark underbelly of society, especially in former colonial countries.  Important conversations about institutional racism and white fragility were brought to the front page on a global level.   Police budgets were slashed in some cities, but more importantly the conversation is now happening and cannot ever be stopped. Even Crayola launched a box of crayons with diverse skin colors for children to “accurately color themselves into the world”. This is a serious example of institutionalized racism and how things need to change for the betterment of all.

The “Me Too” movement also claimed its first major victory with the jailing of Hollywood Producer Harvey Weinstein for rape and sexual assault and the removal of many other sexual predators within the film, media and politics industries. Again shining the light on a taboo subject for many.  News anchors, sports stars all were forced to resign in disgrace for harassing women in the workplace.  American morning TV host Matt Lauer, Motivational Speaker Tony Robbins, Director Bryan Singer, Singer Chris Brown as well as PBS interviewer Charlie Rose all had to come to terms with their public humiliation of their sexual predatory behaviour.  In all 205 prominent men were forced to resign or were fired for sexual misconduct in the United States alone. Days of reckoning came, and there are more to come. And this is a good thing. It’s time to end sexual harassment and assault everywhere.

It was also a great year for women in politics.  Up-ending the global patriarchy and the belief that men are better suited than women for leadership roles.   Global women leaders like Angela Merkel (Germany) Jacinda Ardern (New Zealand), Tsai Ing-wen (Taiwan) and Sanna Marin (Finland) led their countries out of the pandemic.   These ladies are going to be helping to shape the future. Proving that women leaders can get the job done, and in many cases, better than their male counterparts.  In America, the people elected their first female, first black and first South-Asian Vice-President Elect, Kamala Harris.   A huge victory for America and women of colour and asian women. A woman’s right to choose was legalized in Argentina. Seemingly simple gains like Scotland becoming the first country to provide free and universal access to period products.  In film, Lashana Lynch became the first female and black 007 in the James Bond series, the film is forthcoming in 2021.

It was a good year for the LGBTQ+ community too.  Pope Francis endorsed same-sex civil unions and stated that God loves LGBTQ+ children.  Hundreds of religious leaders called on a ban on conversion therapies, saving countless LGBTQ+ children from the cruel torture.  A few countries changed the blood donation rules allowing gay and bisexual people to donate, ending a controversial ban of 40 years.  Northern Ireland, Costa Rica and Taiwan all legalised gay marriages in 2020, a first for an Asian country too. And the American Supreme Court ruled that LGBTQ+ employees are protected by civil rights employment statutes. The world also elected a larger number of LGBTQ+ this year too.

Africa was declared free of wild polio and the Ebola virus was also stamped out.

It was the year of saving the animals too.  From nursing burned Koalas back to health, to the ban of the live-animal markets in China.  France also banned the use of wild animals in circuses.  There even was a huge rise in adoption and fostering of dogs and cats across the world.  Animal shelters had 25% less animals this year, with a growing demand for adoption.  And, there were also a record number of elephants and giraffes born both in the wild and in captivity.

I think another great thing that happened, was that many finally learned the importance of small businesses.  It is not the large corporations like Walmart and Amazon who are going to take care of your community. It is you and the businesses located in it. Many people stopped shopping at the huge retailers, instead chose to support local shops that desperately needed the money.  Buying local became a movement again, with many people focusing on consuming products that were produced within a 150 km area of their home.  I’ve continued to shop at my local store, Le Marché Local because, during the pandemic, he worked seven days a week ensuring we had accessible, affordable and contactless food. He now has my business for life.

We learned to slow down and to connect with friends and family.  People developed new skills and talents during lockdown and started reading books again.  Many focused-on nesting in their homes with decorating and home repairs.  On a personal front, my husband and I made the decision to move at the end of the first confinement, and are now in our dream home. Making the second confinement a little easier. People learned to bake bread, knit, paint or speak another language.  It was definitely a good year for self-improvement.  People checked on their elderly neighbours, helped people to get to appointments and even shopped for them.

One of the best things that happened was of course, that several vaccines were created to combat the Coronavirus, which is something that has never happened before.  It usually takes 3 to 4 years to produce a vaccine, but in 2020, this was done within 12 months, and will save millions of lives.   And American Singer Dolly Parton partially financed one of them.

While many Covid deniers and anti-maskers made the news, along with right-wing politicians claiming it was all a Liberal hoax.  Thankfully, for the most part, the majority of us ignored them, masked up or stayed home, stopped shaking hands, hugging and kissing to help curb the spread of the virus.   While many politicians failed us in 2020, it was the people who did not fail us, in a lot of cases.   It was also a good year for America, if for one reason alone.  To the world’s pleasure, US President-elect Biden defeated President Trump, with a record number of 80 million votes, ending a bizarre and utterly tone-deaf Presidency once and for all. 2020 was the end of Trump and that’s a great thing.

The most important thing to remember about 2020, is that you survived it.  Many did not.  So, be optimistic, wash your hands, wear your mask, social distance, create social bubbles, get the vaccine and hold close the great things that happened in 2020, and move into the 2021 with a clear head.

The late American poet Maya Angelou once said “I can be changed by what happens to me but I refuse to be reduced by it”, let’s all remember that, and carry on once again.

PS – If you are looking for something to do at home, check out my blog about what to do when you are at home in confinement.

← Baguettes, Boulangeries & the French RevolutionLa Thériaque Spiritueux, South of France in a Bottle →